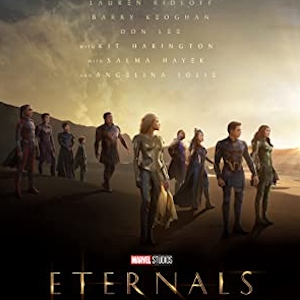 Not the MCU’s best work. In my book, The Eternals falls in the bottom third of MCU movies.

Overall, really good acting by the entire cast. I especially liked the nuance Angelina Jolie and Richard Madden gave to their characters. They did a great job with expressions. Jolie has always been a master at expressions, so she was just average Jolie, which is better than most actors will ever reach.

First, I’m really getting sick and tired of the trope where some advanced/eternal beings deliver the there’s-something-special-about-humans trope. It was the first thing my wife bright up after the movie ended and I can’t agree more. If there really is some galactic community, and they visit and express something-special-about-humans then I feel sad for the galactic community. What’s more likely is an advanced being would say, “We better wipe these yahoos out now before they spread throughout the galaxy and turn it into a giant trailer park.


The Eternal characters felt too human to me. There was no eternal ennui at living on earth for so long, nothing. Except maybe from Makkari who was like, “Can we go home now?” Other than that they were all pretty normal people to me, except for the superpowers. We see them cooking, and eating, yet they are powered by some “Celestial Power Source” or something like that. Do they sleep?

They missed a perfect opportunity early in the movie to dive into this aspect of the Eternal’s existence. (This is a minor scene that happens early in the movie. I don’t think it’s really a spoiler.) Sersi, one of the Eternals, has a boyfriend, a human, who wants her to move in with him, but she declines. Later, Sersi is talking with another Eternal about her boyfriend and the issue that he will die and she’ll live forever. But they could have easily added, “I’d love to move in with him, but then what do I do at night while he sleeps? Just lay in bed, pretending to be asleep?” That would be a small detail that would say a lot about their existence.

I also found the fight scenes between the Deviants and Eternals to be somewhat boring.

The Celestials, like Arishem, are big, really BIG. But not consistently big. In a few scenes, Arishem looks sort of city-sized, but then we see him in another scene where he’s planet-sized. I know it shouldn’t bother me, but it does. Pick a size and stick to it, or clearly point out that they can change size depending on the situation. I’m fine with either but pick one. This is a common problem in superhero movies, especially with strength/power and it always bothers me when the writers are inconsistent with just how powerful a character is from one scene to the next.

What works really well in storytelling is to clearly display a character’s limits early on. It doesn’t matter if the character is a typist, an Olympic sprinter, or a superhero. Just calibrate their upper limits for the audience early on. Then near the end of the story, they can be placed in a situation where they must exceed that limit, even if by just a little bit. It’s a great storytelling device because it reminds all of us that we’re capable of more than we think we are.

This is very spoilery below. Only read if you’ve seen the movie.

The central conflict in the movie is the disagreement between sacrificing a new Celestial or humanity. If the Celestial is born then humanity will be destroyed. Or if humanity is to be saved then the Celestial has to be sacrificed. But the Celestial is capable of creating other stars and planets. Without them, there would be no life in the universe—as the story goes.

This is a good thing to center the plot around so that the Eternals have to pick a side. What I dislike is I didn’t see the motivation for any of the Eternals to pick the side of humanity. I know that Ajak and Sersi say why they’re picking humanity. But I didn’t see anything in the character’s evolution that would lead me to believe they would make that choice. Especially from Ajak. She lived alone and wasn’t in love with any particular human. In choosing humanity they have to overcome their programming and the natural order of things. There just wasn’t anything in their past to make me think they would cross that threshold and choose humanity. There’s great potential for drama when a character changes their motivation. But to do so the audience first has to understand what the character’s original motivation is; then see events that lead the character to question their motivations; then consciously make a change. That’s great stuff, when a writer gets in right. They didn’t get in right in The Eternals.

About The Peetimes: Good news! I was able to download a copy of this movie and get 4 decent Peetimes. IMPORTANT: the Peetime start times may be off by a minute or so in either direction. Try to look for the cues instead of relying on the time. I’ll update the times as soon as I can tonight after seeing it in the theater.

There are extra scenes during, or after, the end credits of Eternals. (What we mean by Anything Extra.)

chevron_left Is there anything extra during the end credits of Eternals?
Movie Review – Spencer chevron_right