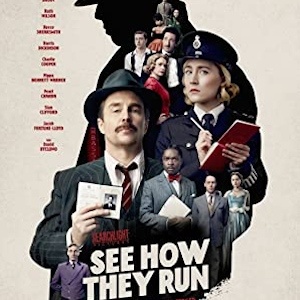 See How They Run was much better than I anticipated. This was an exciting movie that had tidbits of drama, comedy, murder, and mystery. It felt similar to Knives Out and that was one of my favorite movies ever.

They had an awesome cast of very diverse actors, the flow and chemistry amongst them all was top notch. I’m still trying to figure out who my favorite character was. It’s a hard call to make. Flowing just as nicely as the chemistry did were the sets and costumes. I loved how noir-ish it was. From the uniform for the constable to the party dresses, I was drooling. They dressed so much cooler back then.


If you’re looking for something fun to watch that still has substance to it, go see See How They Run. I don’t think you’ll be disappointed.

About The Peetimes: There are 2 great times to go. My preference is the 1st Peetime due to the humor in the 2nd Peetime.

There are no extra scenes during, or after, the end credits of See How They Run.

Plot
A desperate Hollywood film producer sets out to turn a popular play into a film. When members of the production are murdered, world-weary Inspector Stoppard and rookie Constable Stalker find themselves in the midst of a puzzling whodunit.