A common request from users over the years is to help them avoid graphic scenes in movies that might disturb them. For years we tried to do the best we could to create Peetimes during scenes we found to be over the top, or really  disturbing (as compared to the rest of the movie). Now we have made it quasi-official by marking these scenes as Alert Peetimes. 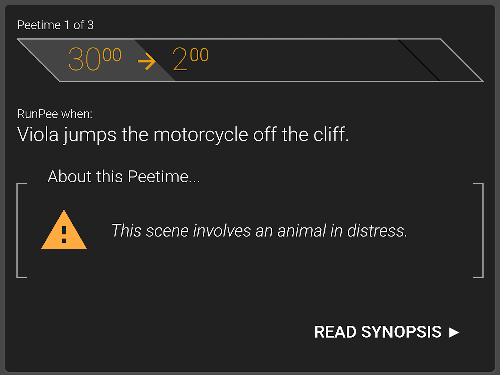 
This solution comes with a few caveats.  First, this is obviously very subjective. What may be disturbing to one person isn’t even noticed by another. However, I think there is a lot of common ground. We focus on scenes that have sexual violence, animal cruelty, or torture. (Hopefully there’s never a scene that involves all three!)

Also, this is contextual. If you’re watching a gangster movie with lots of torture scenes, then what’s the point of making Alert Peetimes for those? That’s what the movie is about. But, if there happened to be a scene involving animal cruelty in a gangster movie, then we’d try to alert you to that.

Second, we can’t have Alert Peetimes that might cover every conceivable thing someone out there might be sensitive to. For instance, if you were recently in a terrible car crash, it might be traumatic to watch a movie and then unexpectedly see a car crash. My suggestion for anyone with an issue like that would be to talk to someone who has already seen the movie, and ask them if one of their trigger scenes is in it.

Third, we make it very clear in the RunPee app that we won’t be held responsible for catching every scene that might trigger someone. We’ll do our best and invite our fans to provide feedback, good and bad, on how we are doing with the Alert Peetimes — but we’re not interested in hearing criticism that blames us for not protecting them from a trigger scene. Again, we’re doing our best with it, but this isn’t our core purpose when getting Peetimes for a movie.

Finding PeeTimes – EXACTLY how I find those movie breaks

Download the RunPee App free at Android or for iPhone.