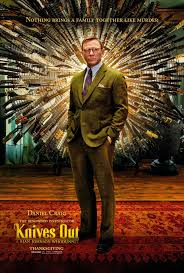 So far, the RunPee Family watched Knives Out 7 times combined to do the Peetimes. Yes, it’s that hard! The movie is filled with clue Easter eggs. Like one of the characters says, “This guy pretty much lives in a clue board.”

Watching it the second time the next day, I noticed so many things I overlooked the first time. Some of them are just impossible to spot the first time because a significant plot distracts you. I can’t wait to share my findings, so let’s dive right into it!

#1 The Baseball
This is the finding that makes me most proud. The arc of the baseball contributes not to the main murder case plotline, but the “Linda-Richard” relationship. Here’s the trip the baseball took:


See the full circle here? The director brilliantly made Richard bringing it all to himself.

#2 The “Extra Bowl”
Remember the scene where Ransom (Chris Evans) and Marta sit down in a restaurant after the will is read? Ransom asked for an “extra bowl” from the waitress — for Marta to puke in later. I didn’t notice it even the second time, but Dan did.

#3 Where Is Marta from?
You probably get the symbolic immigrates subtext the first watch. But do you remember where Marta is from? Different characters describe her as from Ecuador, Brazil, and Uruguay — and perhaps a few others I forgot. The intention is clear: nobody of the Thrombeys’ family really cared.

Read more about the political subplot in Knives Out here.

#4 Secret Messages
Yes, it was revealed at the end of the movie, that it’s a father-daughter game to use invisible ink as Harlan and Linda’s secret form of communication. But the director had actually given us a clue before that. When Linda was in her room reading the letters from her father over the years, if you look closely, you will notice the burn traces.

#5 “Dogs are the best judge of characters.”
Yes, it’s so blunt that you won’t believe it the first time watching it. But it’s that simple. The movie starts with a scene of dogs running on the lawn. The dogs interacted with three main characters. Marta, Ransom, and Linda. They are very friendly towards Marta and Linda and aggressive with Ransom. If you look back at each of the characters, Marta is the kindest. Linda is the only one in the family that actually cares. (She looks down on her brother, but still protects him in front of the police) And Ransom? I don’t need to tell you about Ransom.

#6 What’s With The Donut?
The whole “Donut speech” delivered by Daniel Craig at the end of the movie is just so brilliantly funny. But why the donut? I have a wild guess. The director takes the genre — “whodunnit” — and turns it into a wordplay. “Dunnit”, “Donut”. Yes?

Maybe I’m reading too much into this, but since we’re having fun… The throne of knives forms a donut. When the detectives interview the characters they sit in the chair in front of the knives, ostensibly “filling the donut hole.”

#7 Stage prop
Last but not least. On the faithful night of Harlan’s death, as Marta gives him his medications he talks about his children and their problems. While talking about Ransom he picks up a knife and removes it from its sheath, and says, “There is so much of me in that kid: confident, stupid, protected. Playing life like a game without consequences. Until you can’t tell the difference between a stage prop and a real knife.” Then he stabs the knife into the tabletop. Of course in the climax of the movie Ransom tries to stab Marta with a stage prop.

Did you spot any other hidden clues? Let us know in the comments below.

She does most of the movie Peetimes with Dan and very rarely writes blogs. If you are seeing this bio, that means you have sought her out.
chevron_left What did the Baseball represent in the movie Knives Out?
What is the best all-time series franchise? chevron_right