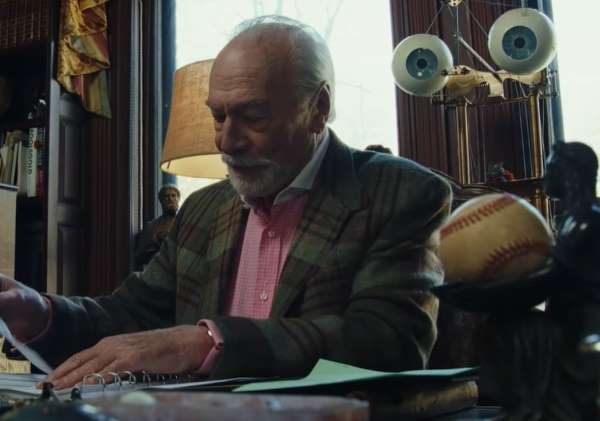 I’ve seen Knives Out twice. During the first viewing I recognized the political subplot contrasting the virtuous Dreamer — daughter of an illegal immigrant — with the entitled, self serving children of a rich father.

During the second viewing I watched closely, looking for symbolism that supported the subplot, of which there is a great deal, but one thing bothered me: what was going on with that baseball?


The baseball was prominently shown as a prop throughout the movie, passing anonymously from one character to another. But what did it represent? Well, nothing really, other than to act as a Rube Goldberg type prop that seemed to move randomly through the story but in the end tied up a loose end.

Let’s start from the beginning. Harlan Thrombey (Christopher Plummer) calls his son-in-law Richard Drysdale (Don Johnson) into his study to announce that he is aware of Richard’s affair and insists that Richard tell his wife (Harlan’s daughter) or else he will. Harlan holds up an envelope with “L” written on it for “Linda.”

Of course Richard protests, but he has no power. Fortunately for Richard, Harlan dies that night. After being questioned by the police and detective Blanc (Daniel Craig), Richard goes into Harlan’s study, breaks into the desk drawer and retrieves the envelope. Inside he finds only a blank piece of paper. He chuckles to himself, puts the paper back, and then arbitrarily, in an act of defiance, picks up the baseball from Harlan’s desk and tosses it out the open window.

In the next scene we see the detectives outside discussing the case. Blanc spots the ball on the ground and picks it up and places it in his coat pocket.

The next day Blanc and Marta walk the grounds as Blanc looks for clues. One of the dogs approaches Blanc with something in its mouth. Blanc plays with the dog by pulling the ball out of his pocket and throwing it for the dog to chase. The dog drops what it has in its mouth and chases the ball. Blanc picks up the thing the dog had dropped and realizes it’s part of the trellis that climbs the outer wall of the house that leads to the hidden window. Blanc chases this clue while the dog chases the ball.

Cut to the next day. The family is gathered, expecting to hear Marta renounce her inheritance. Linda sits in a chair petting one of the dogs that has the baseball in its mouth.

The drama ensues with Blanc interrupting Marta’s renouncement of the inheritance.

In one short scene we see Linda take the ball from the dog’s mouth, and then return it to her father’s desk where it belongs.

Now, let’s flash back to earlier in the movie where Linda mentioned to Blanc that each of the children had to find their own secret way of communicating with their father. Turns out she wasn’t being figurative, but literally meant secret, because she and her father exchanged letters written in invisible ink.

As Linda replaces the ball on her father’s desk she notices the envelope with the “L” on it and takes out the blank piece of paper. She walks outside. As her son is escorted away by the police Linda uses a lighter to warm the paper, exposing the secret message, which informs her that her husband is cheating on her.

Richard threw the ball out the window, where it was picked up by Blanc, thrown again for a dog to play with, retrieved from the dog’s mouth by Linda and replaced on Harlan’s desk where Linda finds the secret letter her father had written telling her that Richard was cheating on her.

I knew the ball represented something, but it escaped me until after the movie I mentioned it to my wife, Vera. She gets all the credit for following the bouncing ball. 🙂

chevron_left The political subplot in Knives Out that tells the real plot
7 Hidden Clues/Humor You Might Have Missed in Knives Out.[Spoilers!] chevron_right