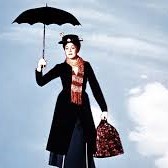 How do I get my Umbrella to do that?

The new Mary Poppins movie is out. (And now it’s streaming on Netflix!) Disney’s magical, musical nanny has returned to theaters after 54 years, five Oscars, a run on Broadway, and a Tony award. While the new movie keeps several staples of the original (the titular nanny, singing and dancing, a fun animated sequence, and kite flying), there are several significant differences.

1. A new actress has taken on the role of Mary. The most significant difference is that Mary Poppins is played by Emily Blunt instead of Julie Andrews. Mary Poppins Returns takes place 25 years after the original film, meaning both Andrews and Dick Van Dyke have aged out of their iconic roles. Furthermore, Andrews had surgery in 1997 that negatively affected her singing voice, making it impossible for her to tackle the movie’s many songs. The good news is that Blunt makes a worthy successor.

2. The father has a different temperament. The father in Mary Poppins Returns is a more sympathetic figure, being a widower with three children. He even gets the heartbreaking song “A Conversation.” Having been raised by the stern Mr. Banks, Michael is trying not to become his father at his worst, and catches himself when he shouts at the children.

3. Mary has a different companion. Like Doctor Who, the on-screen version of Mary Poppins always seems to have a companion. In the original, Mary spends a lot of time with Bert, a jack-of-all trades (most memorably a chimney sweep). In the new movie, Mary’s companion is a lamplighter and their relationship is more platonic than flirty. Lin-Manuel Miranda’s Jack has eyes for Jane Banks instead.

4. There is a thrilling climax. In the original film, the climax is more emotional than physical. The movie’s third act is much more action-oriented this time around. There’s a race against time, an army of lamp lighters, and a famous London landmark involved.

5. Dick Van Dyke does not play Bert. Jack was an apprentice chimney sweep to Bert, who is currently traveling the world. While Bert does not appear in the film, the 93-year-old Dick Van Dyke has a cameo as George Dawes Jr. It may be a smaller part, but Van Dyke still brings the house down when he dances for joy on that desktop.

Two of the numbers from Mary Poppins Returns have made the Oscar shortlist for Best Original Song (“Trip a Little Light Fantastic” and “The Place Where Lost Things Go”). And the movie is eligible in several other categories.

Find out how it fares when the Oscar nominees are announced on January 22nd. Disney is already in early talks for a third film, according to CinemaBlend.

If you do choose to catch up with the new Mary Poppins movie, be sure to use the RunPee app.