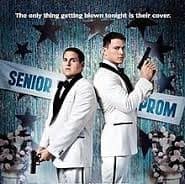 They could have called this Prom Cops and I’d probably have seen it sooner.

21 Jump Street is a sweet little film that flew under my radar until last night. When my mother DVRed it (and subsequent sequel 22 Jump Street) to her TV for our movie night, I was confused. Wasn’t this a TV show? A cop procedural from the 80s?

She promised me it was definitely a movie and probably funny, so I agreed to watch it and make my notes for a virgin movie review. [pullquote]When I saw it had Jonah Hill and Channing Tatum in it, I felt a whole lot better about sitting through it.[/pullquote]

21 Jump Street is actually not a cop procedural, although it’s certainly bookended as one. It’s more like a John Hughes teen angst comedy, with enough cop buddy-hood to keep things a little more grown-up. And yes, upon due investigation, this is a sort of remake/reinvisioned-sequel to the 1987 TV show of the same name. (Sometimes it’s hard to tell if a movie is a continued story or a reboot, but ultimately it doesn’t matter here.)

Was it funny? I’d say I smiled a whole lot throughout and even LOLed a few times. The constant meta-references to Tatum looking too old to be in high school landed well, as did the other funny self-aware bits, like when the police chief tells our guys he’s resurrecting an obsolete, defunct 80s undercover program. Which, yes, that’s exactly what’s happening in-story and outside the confines of 21 Jump Street. When the drama class director says, “And that’s the end of the second act,” it really was the end of the film’s second act. [pullquote position=”right”]For a fluff movie deriving laughs from a fish-out-of-water high school scenario, I found the meta humor more sophisticated than expected in this kind of genre.[/pullquote]

Self-aware joking aside, this movie had a lovely twist in it that I didn’t see coming. I expected things to more or less continue the old school hierarchies seen in the first three minutes, before Hill and Tatum’s characters entered the police academy.

If you haven’t seen 21 Jump Street (the movie, not the TV show), then you might want to stop reading here because I’m going to spoil the twist. Actually, it’s not a twist so much as the entire premise of the show, and I’m surprised I didn’t realize this going in. It made for a pleasant first time viewing to not know, so if you are a complete newbie to this like I was, go away now and come back later.  😉

When we learn the two boys accidentally took on each other’s fake names, I was prepared for a lot of cringe humor (which I cordially dislike). What I got instead was how Hill’s dweeby persona actually suited him in the brave new world of what is/isn’t cool at school seven years later…and how Tatum’s dim-witted turn as a kid enrolled in advanced placement classes actually leveled him up, to the point he could crack jokes about KNO3 (potassium nitrate), and learn to jail-break a phone with his new-found friendly, accepting nerd friends. [pullquote]It was nice to see a movie where role reversals don’t depend on being desperately out of one’s element.[/pullquote] (Haha, I just made a joke about elements, and wasn’t even trying. See? The film even made me smarter.)

Here’s the cute 21 Jump Street scene about KNO3 (it’s about a minute long):

Also, there’s this bit of rocket fun if you add sugar to potassium nitrate. What’s not to love about chemistry? Also, don’t go out now and blow your fool hands off:

Hill and Tatum have some good chemistry together, which looks like it surprised them as much as the viewer. It was all very playful, like two big puppies wrestling. At the prom.

A Discussion on Buddy Cop Movies