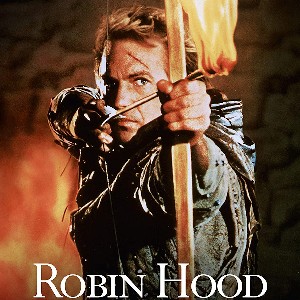 As an Englishman, you might think that I’d have the story of Robin Hood engraved upon my heart. The sad fact is that, while I can vaguely remember some details of the history of England going back to the Roman Invasion of 55BC led by Gaius Julius Caesar, I don’t remember any facts about Robin Hood because, well, there aren’t any! He’s a fictional character who started appearing in ballads in the 15th century. As a result, all I know of him is the same as anyone else; a few old Ladybird books, the TV series with Richard Greene as Robin and Alan Wheatley as the Sheriff of Nottingham, and a few Hammer films.

But, ultimately, it’s a good story and bears repeating. In short, there’s an overseas conflict and the good, honest noblemen (my latent socialism says that ‘good, honest noblemen’ is an oxymoron but that’s by the by) go off to fight. What is left is the bad and dishonest Sheriff of Nottingham who is raising taxes on the common folk to improve his lifestyle. Robin Hood comes along, steals off the Sheriff, and gives the money back; repeat using increasingly elaborate methods until the excitement or humour (depending on the approach being taken by the director) reaches its apex, and there is a final standoff. So, after five shorts, thirteen full-length features, and nine made-for-TV outings we get to the early nineties, and someone with about $50 million decides that it is time for another version.

So… we’ve got sacks full of money and a cracking, quintessentially English story. Who do we get to star as Robin? We’ll get whoever’s hot at the moment! Let’s get Kevin Costner on board. He’s just won an Oscar and in the middle of a creative hot streak. Errm… can he do an English accent? Does that matter? Hmmm… we’ll see. What we can do is get Morgan Freeman involved; he’s not long got an Oscar too. Can he do an English accent? Let’s cast him as a foreigner then it won’t matter. We can fill all the other roles with English people though. Ooh… except for Maid Marion! And Will Scarlett… I promised Christian Slater and Mary Elizabeth Mastrantonio parts. Really? OK if he’s that fussy Christian can play Will Scarlett.

What about the bad guy? He’s got to be English, the best bad guys are… get Alan Rickman for Sheriff of Nottingham. The problem there, he doesn’t want to do it, he’s already refused… twice. Some nonsense about being typecast as a bad guy after Die Hard and Quigley Down Under. Hmmm… he was very good in those. Get him! Tell him he can do whatever he wants with the part. NOW get some English people in to fill things out. Hang on, Mike McShane will be perfect for Friar Tuck and THAT is it. Get a load of people that the British public will recognize if not actually be able to name!  So the call went out to Geraldine McEwan,  Brian Blessed, Nick Brimble, Daniel Peacock, Walter Sparrow, Harold Innocent, Jack Wilde, Pat Roach, and Sean Connery. Well… that’s how I imagine it all went but I might be wrong.

I still remember 1991 quite well. I’d had some personal upheavals and that sort of thing tends to put a bookmark on a year. At the time I was still in education and enjoying the six-week summer holidays. Back then we used to spend pretty much the whole time driving around France, camping wherever we fancied, and enjoying the countryside, towns, people, food, and drinks. At the end of July “(Everything I Do) I Do It for You” hit the charts, presumably, launched on the back of Robin Hood: Prince Of Thieves. I must admit that it didn’t do much for me but c’est la vie. Bugger me if we didn’t come back in September and the damn thing is still at number one! I still wonder who (towards the end of October) decided that then was the time to go out and buy it. Perhaps it was just a conspiracy to keep Right Said Fred’s I’m Too Sexy at number two…

So I may well have come to the party late but as my French wasn’t up to sitting through nearly two and a half hours of Robin Hood: Prince Des Voleurs so I never got to see it until September; funnily enough it was a while before I got to see Raiders Of The Lost Ark too… perhaps that’s a story for the end of July when Raiders hits fifty. Anyway, eventually, I saw Robin Hood: Prince Of Thieves and have to admit that I thoroughly enjoyed it. It was fun and exciting. Alright, the accents were all wonky or even unattempted but, as I’ve said before, cinema is mainly a form of enjoyment for me rather than something I have to analyze.

Join Us… Or Die

I’ll be honest. Robin Hood: Prince Of Thieves is one of my favourite films as one of those that I can watch at any time. When I can’t be bothered thinking of what I want to watch, there are a few films that just hit the spot. Perhaps I can share that list with you all sometime in the future, but for now let’s stick with Robin Hood: Prince Of Thieves. I think Morgan Freeman is wonderful, I did enjoy Kevin Costner when he was at his best, and Christian Slater was marvelous in The Name Of The Rose.

However, without a doubt, for me, the high spot is Alan Rickman. I’ve written about him before but I think it can be said again that he was one of the premier stars on the British stage and screen. He was actually concerned about the typecasting attached to playing another bad guy, but there was no need.

By being allowed to have his head with the script Rickman turned what would have been, probably, a total washout into a minor masterpiece. The famous lines “You! My room, ten-thirty tonight. You! My room, ten forty-five. And bring a friend.”, “I’m going to cut your heart out… with a spoon”, and “Cancel the kitchen scraps for lepers and orphans, no more merciful beheadings, and call off Christmas” was Rickman improvisations. He knew they were working when, during takes, he noticed the crew members covering their mouths, trying not to laugh.

Whether or not the rumours of Rickman having lines cut at the insistence of a jealous Costner might never be proven but, personally, I find them believable; not because of insecurity on Costner’s part but just because Rickman would have been romping away with the audience and we can never have people cheering on the Sheriff and booing Robin Hood… could we?