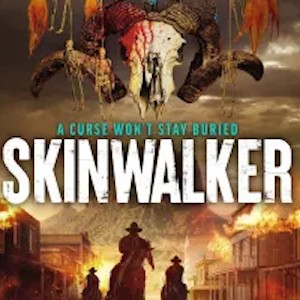 Skinwalker starts off by telling us that we are in the Arizona High Country in 1883. Two grizzled chaps, Benny (Nathaniel Burns) and Hugo (Robert Conway), are creeping through the woods, rifles drawn, looking like they’re out hunting — when they happen across what appears to be a body on a wooden trellis. One of them identifies it as an Apache burial ground, seemingly ignorant of the fact that the body in question is about a metre off the ground.  One man thinks that there might be valuables with the body and knows a guy who’ll pay “tip-top for all this Indian stuff”. The other thinks it should be left alone.

Now if our two hunters had just walked away and left things well alone, then Skinwalker would be only marginally longer than the trailer. However, one of them steals an elder death totem and things get off to a rollicking start. We’re not five minutes in before Hugo gets bitten by a snake which, somehow, leads to him becoming possessed.


This comes as a bit of a surprise as it was Benny who stole the artifact. Well, if anyone should know it’ll be Hugo; Robert Conway also wrote and directed Skinwalker. At this point we hit the opening credits… well, title card.

From this point on we meet the rest of our dramatis personæ.  Maisie (Eva Hamilton) and Elmer (Chris Beeman) are a couple of baddies taken into custody by Marshall Bascom (Dan Higgins) and Deputy Riggs (Cameron Kotecki). They take the prisoners to the nearest town to collect the reward, but the place has been all but wiped out by a plague of cholera. This means they have to keep on going to the next town — an arduous trek over a mountain.

Meanwhile, Maisie’s husband, Dalton Jackson (I don’t know who he offended but he doesn’t seem to get a credit!), and the rest of his gang, Vern (Charlie E Motley) and Hitch (Bill Scott) find out that she’s been taken and set out after them.

The bad guys decide to set off over the mountain on foot in order to ambush the lawmen and Maisie (or Margaret, she gets called by both) as there’s only one way suitable for horses. En route to the ambush point, they stop for food and rest at an isolated cabin that is home to Willard (Daniel Link) and three women; Judith (Lizz Manning), Clara (Becky Jo Harris), and Nellie (Amelia Haberman).

What is the relationship between Willard and the women? It could be some sort of polygamous arrangement, they could be sisters who have lost their mother, or one of them could just have been a very young mother but, ultimately, it doesn’t really matter much and it does get resolved partway through.

This home is where a disoriented Benny has wandered and is tied up, frothing, in a shed.

Throw in a couple of American Indians who are seeking revenge for the earlier grave robbing and a Medicine Man and that puts everyone on the same mountain at, more or less, the same time. And so starts the mayhem!

I say “starts” but it actually all kicked off with Benny and Hugo before the titles, but now is when things really kick up a gear. There are misunderstandings, incorrect assumptions and accusations, and bullets and arrows flying around left, right and centre. Also, there is the ever-present threat at whatever is going on with Benny and how it’ll spread.

Westerns and horror films aren’t really my favourites, but Skinwalker wasn’t too bad! It was an interesting twist on the old zombie trope and it was very well performed throughout.

The twists and turns were well thought out and executed so that there were no big, clunky “how did that happen” moments.

Was it perfect? Well, no. Benny seemed to switch between having his hands tied and free at points, there was a quite unbelievable killing of one of the sisters/wives, and a blood splatter effect obviously didn’t have millions of dollars spent on it; some films would have spent more just on that half-second of screen time than the entire budget of this film. But I think that shows how well-made Skinwalker actually was as I only found a handful of things to moan about; other films I see tend to have so many things wrong that I lose count!

Oh, stick around to the start of the end credits… it’s not quite in the same pants-wetting class as Brian De Palma’s Carrie, but it’s getting there!

chevron_left Is there anything extra during the end credits of 12 Mighty Orphans?
30th Birthday Rewatch – Robin Hood: Prince Of Thieves (1991) chevron_right