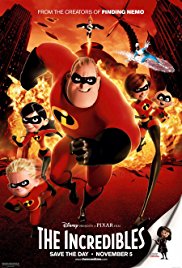 This movie is really good! I hate using such an imprecise term, but I’m sitting here shocked at how good this animated superhero film is.

I’d seen Incredibles when it came out in 2004, and certainly liked it, but now, in 2018, I have a different mindset. Back then I had no idea how…well, GOOD superhero movies were going to get. [pullquote]Remember, 2004 was still a few years away from Iron Man and the start of the massive Marvel Cinematic Universe, which really defined and perfected the superhero experience. [/pullquote]I think back then, all we had were some Spiderman movies of various quality, some Batman movies that really didn’t age well, and early X-Men. And Fantastic Four. Which is a perfect segue to my next point.

It’s clear that the Incredibles are a remake/rebooted version of the Fantastic Four, which is interesting: Fantastic Four tried twice to make their series work, and both bombed terribly. I mean, they were simply awful. So who would think that tweaking it into an animated film would be  a good bet?

Incredibles is good enough to be a Marvel movie, quite frankly. It may as well be one, maybe in an alternate universe. You forget you’re watching cartoons about ten minutes into the film, which starts quite charmingly with an “old news reel” and a flashback to Mr. Incredible and ElastiGirl in their heyday.

The movie picks up at a place that would not seem too far from the X-Men Universe: all the supers have been relocated and retired by public demand, due to traumatic collateral damage done in the name of “helping mankind.” The Incredibles family has to hide their powers and try to live normal lives in suburbia. Mr. Incredible works in a dead end insurance job, and ElastiGirl is a stay at home mom. Their kids have to hide their superhero status as well, which chafes them to no end. How can you try to “be your best” when your best can never be tested? How can Mr. Incredible be “normal” when he breaks everything he touches, and has to be constantly vigilant against his own strength? We see him mourning for the good old days, and listens to police scanners at night with best friend FloZone (voiced by Samuel Jackson, clearly enjoying himself), sneaking out to do clandestine hero work.

I didn’t notice at the time, but in this rewatch, knowing there’s going to be a sequel out soon, I saw how clearly the film demanded a follow-up. When you watch it again, take note of how nothing has actually changed for this family. Well, except for Jack Jack, but we wont go into that here. Basically: at the end of their adventure, the family goes home and back to their “Witness Protection” style life. The supers are still not welcomed by the public, the government, or the world. It’s back to suburban hell. We don’t see that in the movie, because they ended the film on the high note of putting their masks on (which is more symbolic than useful, but just go with it). Their family unit maybe stronger than ever, but now the fun’s over and it’s time to put the leash back on.

So it does demand another film. How has the Incredible family unit been managing, back at mind numbing jobs and public school?  From the trailers it looks like (SPOILER ALERT)….scroll down or not…

Okay, from the trailers it looks like ElastiGirl is back on the job and in the public eye. Mr. Incredible has to be Mr. Mom. So maybe the supers are accepted again? Or is using ElastiGirl a way to slowly ease the public about reintroducing supers? I’ll go with the latter.

Anyway, the sequel looks pretty good, and I know it will pack the theaters, as we’re just not saturated with superhero movies. It’s pretty much a Golden Age for hero movies and we keep lapping them up and asking for more. I’m fine with that.

Incredibles is a fine film, with a lot of heart and humor, charming characterizations, surprisingly good chemistry in a voice-over medium — it’s just enjoyable on every level. The Big Bad is a bit annoying, but creating a great villain is a sticky point for almost every superhero film. You can just ignore whathisname, and get back to marveling at the amazing visuals and snappy banter/bickering.

I recommend seeing Incredibles again, before catching Incredibles 2, just to get back up to speed with these great characters and their family dynamics.

Here’s a link to the blu-ray of the original Incredibles movie, and the logo tee shirt. I’ve seen entire families wearing this shirt, and not just for a family Halloween theme…places like Disneyland, so it’s easy to find each other, or on any family outing to show they are a family unit. It’s fun.