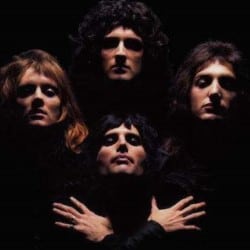 I love the song Bohemian Rhapsody, and sing it out loud with glee every time I go backpacking (in the woods, no one can hear you sing). But, I have to admit: I don’t understand a lot of the bizarre words in the song. With the new film about Queen, fittingly titled Bohemian Rhapsody, I decided to use the interwebz for a long look at the meaning of this iconic song.

According to the Wikipedia, Bohemian Rhapsody was written by Freddie Mercury for the band’s 1975 album A Night at the Opera. It’s a six-minute suite, consisting of several sections without a chorus: an intro, a ballad segment, an operatic passage, a hard rock part, and a reflective coda.

Somehow, this random assortment of music genres works brilliantly. But what’s the story about?


Take this quiz to find out which queen member you are.

Let’s start with the obvious aspects: a young man killed someone, and he’s apparently about to pay for it with death. That’s plain. He’s telling his mother goodbye, and feeling like the devil is waiting for him. (Beelzebub has a devil put aside for me…for me…FOR MEEEEEE!!!)

Here’s what Dictionary.com has to say:

Apparently Freddy Mercury is using this name to signify Lucifer himself, or his demonic equivalent.

SongFacts says the word “Scaramouch” means “A stock character that appears as a boastful coward.”

The Wikipedia goes on to say a bit more: Scaramouche (from Italian scaramuccia, literally “little skirmisher”), also known as scaramouch, is a stock clown character of the commedia dell’arte (comic theatrical arts of Italian literature).

The best explanation I’ve seen is in this music forum, by a poster called, fittingly, Galileo:

“I’ve read somewhere that the line ‘Gallileo figaro magnifico’ in the middle of the ‘operatic’ section of the song, actually, is a slightly corrupted Latin phrase, ‘Galileo figuro magnifico’, translated as ‘Magnify the Galilean’s image’.

“It’s a key phrase, which reveals the entire meaning of the song, and usually it isn’t translated by the researchers.

“In fact, Galileo was the name of Jesus Christ in the ancient Rome. In other words, the only way to get out of the demonic nightmare of the song is to magnify Jesus Christ and ask Him for help. But the boy can’t believe that God is concerned about him, and refuses the salvation (‘Nobody loves me’).

“Plus, as everybody knows, Galileo is the name of the an Italian physicist and astronomer, who made in the early 17th century the first telescopic observations of the planet Mercury... [emphasis mine]

“If this is true, what kind of GENIUS Freddie was?”

Let’s back up a little bit and see the entire picture Mercury was trying to evoke.

Quora says this about the song’s title:

It is called “Bohemian Rhapsody” because it depicts the life of a ‘bohemian‘, whose original meaning is ‘artist’ while ‘Rhapsody‘ is a fantasy (literally, it could play in his head) or a vision; within this song Freddie Mercury foresees his life in a symbolic way.

Below are the lyrics for the operatic section of the song — the part that trips everyone up. You can look at it now and understand a little better what Mercury was going for. I think he used macabre themes from old plays and operas to cast an image that was delightfully off-kilter and evocative. He’s talking about death, mostly. Isn’t it strange that so…well…FUN a song is so wrapped up in death and killing? Perhaps in a weird way, Mercury is singing about himself and his own life through this narrative metaphor.

It’s possible that Mercury’s songs Somebody to Love and Under Pressure are also about his inner demons. I’m not the only one thinking along these lines.

Tim Rice, co-creator of Jesus Christ Superstar and Evita, as well as a collaborator of Mercury’s, once said, “It’s fairly obvious to me that [‘Bohemian Rhapsody’] was Freddie’s coming-out song.” (From Into.)