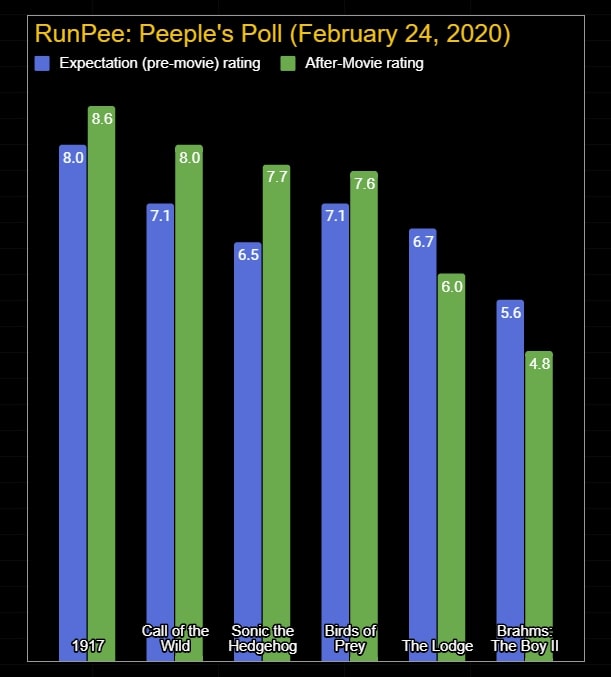 Another not great week for new movies. Call of the Wild did pretty well. (I have it an A in my review, partly for sentimental reasons.) The Peeple gave Call of the Wild a respectable 8.0 After-movie rating, up 0.9 points from the 7.1 Expectation-rating. That’s not going to win any awards, but it’s a solid showing.


Sonic the Hedgehog remains a pleasant surprise. (Read the review here: B+.) The After-movie rating held steady at 7.7, but its Expectation rating dropped by 0.1 points (down to 6.5). That means its improvement over expectation only improved — up 1.2 points. Compared to most movies, that’s a much larger gap of improvement and will likely remain as one of 2020’s surprise hits of the year.

Of course, 1917 remains the highest-rated movie in the Peeple’s Poll so far this year and is still one of the most viewed movies in the RunPee app. There’s no doubt that it will be among the highest rated movies for the entire year. Ford vs Ferrari was the 2nd highest-rated movie of 2019, with a 8.7 After-movie rating. (Avengers: Endgame achieved a staggering 9.2 After-movie rating that may never be beaten by any movie.)

Who rated Star Wars: The Rise of Skywalker higher, men or women?