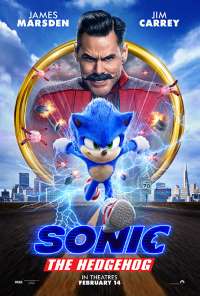 This is a crazy hard movie to review. I could write a 5,000 word essay on Movie Review Theory, but I’m certain that’s not what you’re here for.

Therefore, I’ll simply say that I’m grading/reviewing this movie based on how I believe Sonic: the Hedgehog fans would rate it. Which again, isn’t easy because I never played the game.

What I am certain of is the theater last night was surprisingly full. I expected I might be the only one in there, but I was very wrong. (Who knew?)


Also, at the end of the movie there was a smattering of applause… From the adults. (I didn’t see that coming.)

There were numerous young children in the theater and they all seemed to be engaged throughout the movie — based on their conversations with the characters on screen.

I think kids will like it because the plot and character motivations are very easy to understand. They never over-complicate things.

I can’t begin to guess why adults might like it, because as I said, I never played the game. But a lady sitting near me had a Sonic: the Hedgehog t-shirt on, so after the movie I asked her if she enjoyed it and she said she loved it.

Clearly, the audience for this movie is children and adults who are big fans of the game. As someone who fits neither of those demographics I’d say the movie was technically well done. The story flowed easily; there was nothing unnecessarily convoluted. (Sometimes movies like this try to appeal to a broader demographic and fail miserably.)

All that said, as much as the kids and adults appeared to enjoy this movie, I just can’t bring myself to give it an A-grade. B+ it is. That’s still a good grade.

About The Peetimes: None of the Peetimes involve any action scenes with Sonic. I would recommend the 3rd (last) Peetime. It was the easiest to summarize.

There are extra scenes during, or after, the end credits of Sonic the Hedgehog. (What we mean by Anything Extra.)

Is there anything extra during the end credits of Sonic the Hedgehog?