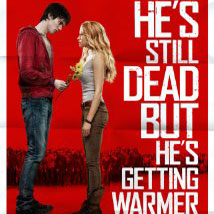 I would like to ask the people who make the movie trailers to stop including every funny scene from the movie in the trailer. You see these trailers and think, *dang that looks awesome!* I wonder what else will be super funny? So, if you’ve seen the trailer for *Warm Bodies* you’ve seen all the funny stuff already. The trailer goblins fooled us again.


I really liked the first twenty minutes. They started it off with R (the zombie kid) narrating what his life is like as a zombie. Then he meets Julie and becomes smitten with her. There were some cute looks and grunts which were adorable in a zombie kind of way. I was loving it so far. Then the movie itself became zombified – lagging – until the last ten minutes.

Rob Corddry added a nice little zip to the movie. It would have been better if they had amped up his role. Speaking of which, I really thought John Malkovich was going to steal the movie as he normally does. I walked away thinking any nameless actor could have pulled off his part. There was absolutely nothing memorable about his character or his lines. I didn’t even like him.

I am not trying to turn anyone away from this movie but I did want to let you know that my expectations for the movie weren’t met. Perhaps due to the volume of movies I see I may have become jaded on this genre. I was expecting too much. If you go in with the thought that you just want to see a movie where zombies aren’t horrible creatures and can be endearing then go for it. Otherwise I’d suggest waiting for the DVD.