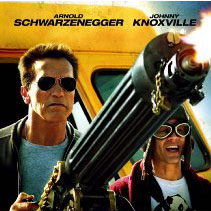 I’m not saying that he’s a great actor by any means. But his performance in *The Last Stand* was a little better than decent. He appeared comfortable in his role instead of the forced performances of many of his past movies. He even displayed emotions of sorrow and remorse through expressions. I would be curious if others feel the same way about his role in this movie. What he can do with his physical skills has certainly diminished but he’s growing into a more expressive actor. I’m looking forward to seeing if he continues this trend in his upcoming movies.


The story was mind numbing. The bad guy was a cliche; the FBI agent was a cliche; the… well, I don’t want to give anything away but that other thing was a cliche as well. I’ve seen car commercials that were less predictable. In fact, this movie isn’t much more than a Corvette commercial anyway.

The one saving grace for the movie, besides Arnold’s surprising performance, is it’s campyness. Right from the first few scenes we know that this isn’t a movie to be taken seriously.

Bottom line: Unless you’re just dying to see Arnold’s return to movies in a leading roll then I’d definitely recommend this for DVD.