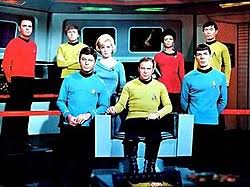 I recently went to Disney’s Star Wars “May the 4th” overlay of Tomorrowland (it was worth seeing), and from afar spied the rock spires towering above the construction for Galaxy’s Edge – an entire new Disneyland themed park about the world of Star Wars itself. It’s to be an entire immersive city, set on another planet, and I CAN’T wait til it opens next summer 2019 (with Disney World following up their version in the fall of  2019).

My impression is that Galaxy’s Edge will be a lot like Universal’s Wonders of the Wizarding World, which I made a long-overdue first visit to last month. I had my Hogwarts Robes and school clothes on (Proud Gryffindor!) and completely allowed myself to drown in the experience. (I’ll a link here when I’ve reviewed that trip.)

It got me to thinking of other possibilities for immersive fantastical environments and wondering when a land devoted to Star Trek will show up.


A quick search showed me Universal in Florida is indeed planning just that.[

I was able to get a nice Star Trek experience previously in Las Vegas, of all  places, at the Hilton’s Star Trek Experience. It was sort of a cross between being on the set of Deep Space Nine, with an interactive TNG show. (Again, I’ll cover this in detail elsewhere.) It gave me a valid excuse to go with friends to Vegas, at any rate. I went a few times to share Blood Wine with their roving Klingons. Unfortunately, the Hilton shut down the Experience in 2008.

Then a re-booted Trek movie came along in 2009 to fill in the void, experience moderate (if not resounding) success. We at RunPee owe a lot to Trek 2009, as that was the movie propelling the RunPee app to international acclaim.

Now, with  Star Trek: Discovery — a new CBS Trek show on TV — and more Star Trek movies coming up (apparently directed by Quentin Tarantino), the irons are hot enough for somebody strike. [pullquote position=”right”]Time to follow up on the success of the Wizarding World, and provide a counterpoint to Star War’s Galaxy’s Edge.

So, to get back to Universal, Screenrant reports that a Star Trek Land is in the works already! And they’re fast-tracking it to compete directly compete with Star Wars Land. I’m fine with that. The more opportunities I get to dress up and play at being something futuristic or fantastical, the better. I’ll do it all.

How to See Galaxy’s Edge at Disneyland Right Now