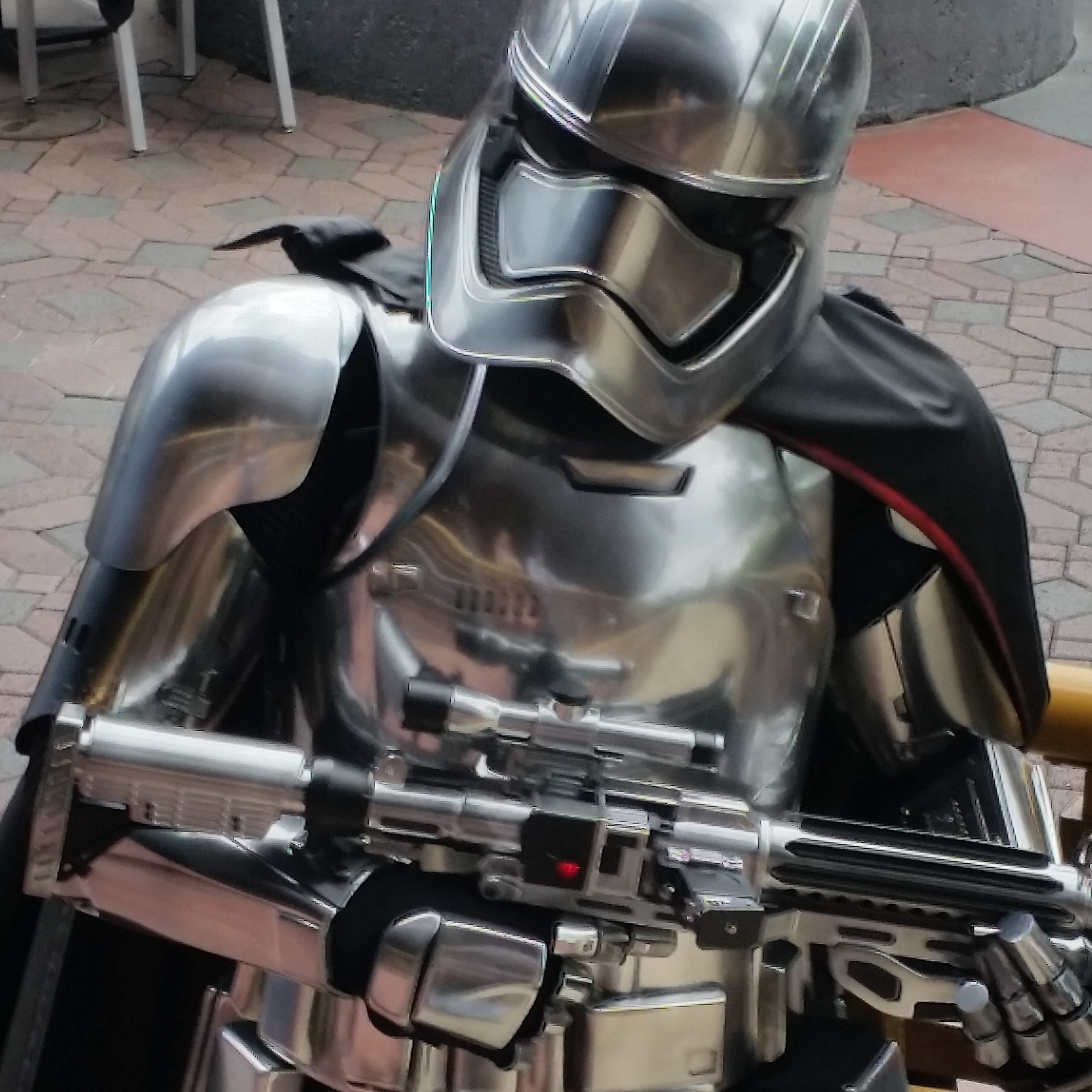 From May the 4th through the opening weekend for Solo: A Star Wars Story, Disneyland’s Tomorrowland has a makeover hailing from a long time ago, in a galaxy far, far away. In other words, The Force has taken over.

With Star Wars now a Disney property, Disney is the upcoming go-to place for immersive SW experiences — and next year, with an entire Star Wars “Land” opening, it should be as exciting as Universal’s Wizarding World of Harry Potter. While Star Tours (A Star Wars motion-car ride) has been at Disneyland since 1987, that was essentially it for interesting intergalactic mayhem, for a long stretch of time.


Nowadays, fans can buy tickets for exclusive  “May the 4th” night-time parties (this year’s $99 event sold out in mere hours, prompting Disney to open a second evening’s events), a $130 intergalactic shindig on May 27th (celebrating the opening weekend of the young Han Solo movie), and a temporary re-do of several older areas of the now scruffy-looking Tomorrowland.

Tomorrowland desperately needs an upgrade. It may have seemed very futuristic when it opened in 1955, but now just looks like a joke. It’s dated almost beyond repair. For a while that ‘land’ limped along as a sort of nostalgic look back on what the future would bring, but that stopped being relevant when the baby boomers started aging out of attendance. Star Tours went through several different story iterations, and became the only attraction worth seeing in that entire section of the park. Call this area a sci-fi money pit.

For one thing, Space Mountain was getting tired. This ride-in-the-dark roller coaster was amazing for decades, but slowly became a second-tier attraction, like Thunder Mountain Railway and Matterhorn Bobsleds. This month, it’s been glitzed up with a snazzy Star Wars theme, and the signage has been overlaid as Hyperspace

Mountain. The outdoors section of the line is still awful (only grey concrete to look at for however many hours you wait to get inside). Once the line gets inside the building, lots of Star Wars stuff appears. The best part is a video mini-movie featuring Admiral “It’s a Trap” Ackbar, describing your new mission, and a hope that the Force will be with you.

The ride itself seemed more fun than I recall. I think it’s darker inside, which makes the roller coaster part more fun. You don’t know which way the coaster will go next — up, down, sideways, zig zag, etc — and it’s a lot more exciting. And now the coaster starts off with a Star Wars send-off, and a brief passage through the shooting lights of hyperspace.

If they keep the Star Wars elements intact after this month, the ride is again worth doing.

The line for this attraction is amazing. It’s almost better than the ride itself – no small feat. Once you get inside the “Spaceport Terminal,” every detail is seen to in a wacky, unbridled creative sense of joy. C3PO and Artoo are in there, as well as Number Five, from 1986 movie Short Circuit, apparently in charge of baggage.  This is how you manage crowds! And the motion-car attraction is a nice experience.

It’s upgraded to cover the sequel trilogy with Kylo Ren, and your shuttlecraft is still piloted by those old counterpart ‘droids. They’ve added 3D glasses to the experience. I’m pretty sure this attraction used to be occupied by Captain Eo (Michael Jackson himself) way, way back in the day. Anyone remember that?

As you leave Star Tours, you transit a huge store full of SW merchandise. If you like Star Wars, drop your cash here for some mighty cool swag.

You can also enter the store without entering Star Tours.

This little show occurs several times over the course of the day, featuring Captain Phasma and her crack First Order troops marching to fanfare throughout Tomorrowland. Phasma barks out commands, and the troops scan the audience at phaser-point, looking for Resistance spies. [pullquote position=”right”]I recommend standing in front of, and facing, the Star Wars Launch Bay for the best viewing. If you’re lucky, you’ll get singled out as a spy.[/pullquote] It’s a short show, but fun.

This show is mostly for the kiddies, who get to put on Padawan robes and learn lightsaber techniques onstage. It’s got showings all day long, and has a bit of story to it. Fun viewing for every age.

This area used to be a cafeteria, if I recall correctly. How…inspiring? I’m glad they turned it into a Star Wars Museum. And it’s the kind of museum that’s immersive – props are treated as actual relics and archival pieces, with fantastic signage, costumes, movie featurettes, and lots of room for more Star Wars additions as new movies roll out. Best thing – there’s no line, and barely anyone was even in there when I visited. It’s a cool and dark refuge for hot days. I really liked this space, and took only a bazillion photos (so I could read the “museum signs” at my leisure).

There’s a section in the Launch Bay that sells some extremely exclusive merch. Like a full-sized Storm Trooper, retailing for $6,000. Or you can get a copy of Rey’s Last Jedi shirt for only around $100.

These characters are available all day for photo opps, located in their own private chambers within the Star Wars Launch Bay. Wait times were only 5-15 minutes while I was there. The costumed cast members act in character for you, making it a super cool experience. Plus, you get to hug Chewbacca. He gives great hugs. Seriously, ALWAYS take the time to hug Chewie.

Scheduled to open in 2019, Disney will open Galaxy’s Edge, an ENTIRE LAND devoted to Star Wars. I assume they will move the Tomorrowland’s SW attractions there…leaving…exactly what in Tomorrowland? There won’t be anything left that’s worth doing. I say they should raze Tomorrowland to the ground and come up with a new and more cutting edge property. (What Disney franchise hasn’t been tapped yet? Pixar is covered already. Personally, I’d love to seeAliens, Star Trek, or Titanic themed areas, but those aren’t Disney owned.

Avatar would be great! Disney World already uses Avatar at their Animal Kingdom Party…so maybe they will import some of that here and revamp an erstwhile Tomorrowland into Pandora. James Cameron’s new Avatar movies are coming along soon, we hear.

Read our easy, no waiting, no-lines tips to viewing the tall and otherworldly spires of Galaxy’s Edge at Disneyland. (From now til the land opens in the summer of 2019)

(Images above owned by RunPee.com)