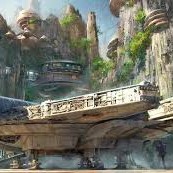 Scheduled to open in 2019, Disney will open Galaxy’s Edge, an ENTIRE LAND devoted to Star Wars. You can’t see much of it right now, and the things you can see are a  little hard to parse. Basically, you’re seeing the background spires of a alien city, on an strange new world.

Galaxy’s Edge seems to be a response to the runaway success of Universal’s Wizarding World of Harry Potter – where they drop you into the entire town of Hogsmead (at the California park) – and let you run “hog”-wild pretending to be a Hogwart’s student on a rare weekend out.

Galaxy’s Edge should be just as exciting, especially if your tastes lean more to sci-fi than fantasy.


[pullquote]Here’s some fun tips if you visit Disneyland in 2018. You can spy the  fantastical construction for Galaxy’s Edge in several locations that don’t require waiting in lines.[/pullquote]

1. Climb up into Tarzan’s Treehouse in Adventureland. The high viewpoints have great views, and you’ll have the treehouse almost entirely to yourself.

2. Get on the Disneyland Railroad at New Orleans Square. You will need to turn around to face the opposite way, but as you pass through Critter Country, you go right under some of the spires and peaks of the Galaxy’s Edge setting.

3. Go into the Launch Bay in Tomorrowland and you’ll have gave a nice cool, mostly dim place to view star wars props, models, uniforms and then the large and detailed Galaxy’s Edge diorama/backdrop. (See photos.)

4. Another hidden find: If you try to circumnavigate the lake in New Orleans Square (in the direction of Critter Country, going left, past the Haunted Mansion), you’ll hit a wall. Literally, the path ends in a big flat wall — decorated only with a poster of how Galaxy’s Edge will appear, and no signage. It’s a quiet statement of excitement from the Imagineers.  I can’t wait.

(Image Below Owned by RunPee) (<— Click link to embiggen)

Read more about where to find Star Wars fun this year (2018) before Galaxy’s Edge opens next summer.