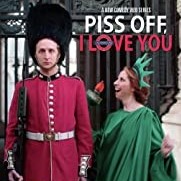 A bit of a change of direction in that Piss Off, I Love You isn’t a film, but a TV series…and here we go!

Here we have a “fish out of water” sitcom. The fish being the writer, director, producer, and star Jessie McCormack, as an American presenter brought over to London to present a series highlighting the differences between the UK and the USA.

As well as the cultural differences, Sandy/‘Murica, played by Ms. McCormack, also has to deal with her not being the first choice for presenter, and a rapidly diminishing budget for the show.


The first show is mainly a set up episode, which shows us the cast being assembled amidst the producer’s domestic turmoil, and some less than co-operative subjects for the planned and spontaneous interviews.

I’ll be honest, for me it seems like this is going to be a jolly nice little series. It is very fresh in that there are plenty of references to the ongoing political situation, and the supporting characters are just a wee bit larger than life; enough to be amusing and make the point, but not so much that they become caricatures.

In the trailer there is a scene where Sandy is trying to make a Guardsman laugh, except that he’s obviously not a Guard! (Bearskin incorrectly worn; Grenadier Guard jacket but Scot’s Guard bearskin.) Having said that, I may be taking it totally out of context, so I won’t worry too much.

All in all this was an enjoyable, amusing little episode and I look forward to the rest of the series.