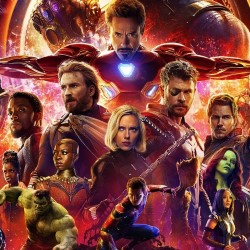 At this time, there are exactly 19 movies in the Marvel Cinematic Universe. Ant Man & The Wasp is coming soon (to make an even 20) but that tale will probably be a self-contained story: a palette cleanser after the lingering after-effects of mighty number 19, the Avengers Infinity War.

You probably already know Infinity War is the culmination of 10 years of cinematic storytelling, with a cast of literally dozens of named characters. To catch up to this point, one would have to sit through several days of non-stop movie-going…] starting with Iron Man 1, the film that kickstarted it all. A lot of fans converged in New York City for 31 hours of Marvel goodness, and I hope they brought their Peetimes. (Note: the NYC screening only played 12 films for their marathon, so you’ll have to do the math yourself for a grand pre-Infinity War hours-long total of all 18.)

But, what if you don’t have time for a full re-watch before IW leaves the theaters? Or — Ragnarok forbid! — maybe you’re kind of an MCU newb. (Clue: if you don’t know what MCU stands for, you might be a rookie.)

RunPee is here to help. If you had to, you could get by with a five-film preview and be more or less up to speed. Here are those five, plus a few extra honorary mentions if you have some extra time/inclination. This slim five movie line-up means you’ll miss a few important origin stories, but for the ones I skip, things can be summed up in one or two lines. You’ll see.

Five Must-See Films, with No Spoilers:

Six Honorary Mentions (If you have the time), and what you need to know if you skip them (with spoilers to get you caught up — be warned):

Keep in mind, I’m not listing which movies are the best in the MCU, nor saying that the rest are unimportant or uninteresting in their own right. This is just to get you to a place you can potentially watch Infinity War and not be totally,  hopelessly lost. Have fun, and let me know if you agree or disagree in the comments. Movie-watching is subjective. Which five would you say are crucial?

To help you get ready:

Lyrics and Video to Blitzkrieg Bop from Spider-Man – Homecoming

Every Stan Lee Cameo in the Marvel Cinematic Universe