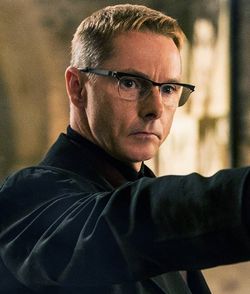 Ethan Hunt (Tom Cruise) is determined to prove the existence of the Syndicate, a criminal consortium the CIA does not believe exists. Ethan is captured by the Syndicate at a record shop in London, while their leader, a blond man in glasses, kills the IMF agent stationed there.


Back in Washington, D.C., CIA Director Alan Hunley (Alec Baldwin) testifies before a Senate committee charging that the IMF is destructive. Hunley succeeds in having the IMF disbanded and absorbed into the CIA.

Cut off from the IMF, Ethan follows his only lead: the man in glasses, later identified as former MI6 agent Solomon Lane.

Six months later, Ethan enlists former colleague Benji Dunn (Simon Pegg) to attend an opera in Vienna, predicting that an assassination attempt will be made on the Austrian Chancellor. Ethan and Benji stop two snipers,  and meet Ilsa who is also there to kill the Chancellor, but her loyalties are… complicated. (She’s sent by MI6 to infiltrate the  Syndicate.) Ethan and Ilsa escape the opera house together, believing they have saved the Chancellor, but he is killed by a car bomb, and Lane is still not found.

Ilsa convinces Ethan that she has to stay undercover and jumps out of the car, pretending that Ethan captured her but she got away, so that the Syndicate agents will pick her up and return her to Lane.

Benji stays with Ethan instead of reporting back to the CIA, despite knowing his action amounts to treason.

Ethan, blamed for the Chancellor’s death, is pursued by the CIA’s Special Activities Division. Former IMF teammate William Brandt (Jeremy Renner), who now works with the CIA, contacts Luther Stickell (Ving Rhames) to find Ethan before the CIA does. Luther tracks Ethan, Benji, and Ilsa to Casablanca, where they acquire a secret file from a secure building. Ethan drowns during the mission, but Ilsa rescues him and uses a heart defibrillator to resuscitate him. Ilsa then flees with the data, evading both Ethan and Syndicate members, although Ethan kills the pursuing agents.

Benji reveals he copied the data onto a second USB drive, as Luther and Brandt catch up to them.

Ilsa returns to London and attempts to use the file to quit her mission to infiltrate the Syndicate, but her MI6 handler, Atlee, compels her to continue, whilst discreetly wiping her drive. Meanwhile, Ethan learns that the data is an encrypted British government red box that requires the Prime Minister’s biometrics to unlock.

Lane’s henchmen abduct Benji , and use him to blackmail Ethan into decrypting the data and delivering it to them. Ethan agrees to the ultimatum.

As part of Ethan ‘s plan, Brandt reveals their location to CIA Director Hunley. During a charity auction Hunley, Brandt, and Atlee (Ilsa’s handler) take the British PM to a secure room to protect him from Ethan. Brandt has the PM confirm the existence of the Syndicate, a project proposed by Atlee to perform missions without oversight. After the PM reveals the origin of the Syndicate to CIA Director Hunley, Atlee reveals himself as Ethan in a mask.

When the real Atlee arrives, Ethan forces him to admit that he continued with the plans to create the Syndicate without permission and that he has been covering up its existence after Lane hijacked the project and went rogue, turning the Syndicate against him and MI6.

With the PM’s biometrics, Luther discovers the file contains access to £2.4 billion in various bank accounts, which would allow the Syndicate to continue their operations unnoticed; Ethan promptly destroys the data.

Ethan meets Benji and Ilsa at an outdoor restaurant. Benji reveals that he’s wearing a suicide bomb and has an earphone so he can deliver the message from Lane.

Ethan tells Lane he destroyed the drive and memorized the data and offers himself in exchange for Benji and Ilsa. Lane is forced to deactivate the bomb and let Benji go. Ethan and Ilsa are chased through the streets of London by Lane’s men. Eventually Ethan is wounded and chased by Lane. He lures Lane into a sealed glass cell where he is gassed unconscious and taken into custody.

Hunley, having witnessed an IMF operation’s success firsthand, returns with Brandt to the Senate committee and convinces them to restore the IMF by covering for Ethan and his team. After the meeting, Brandt congratulates Hunley, who is now the new IMF Secretary.