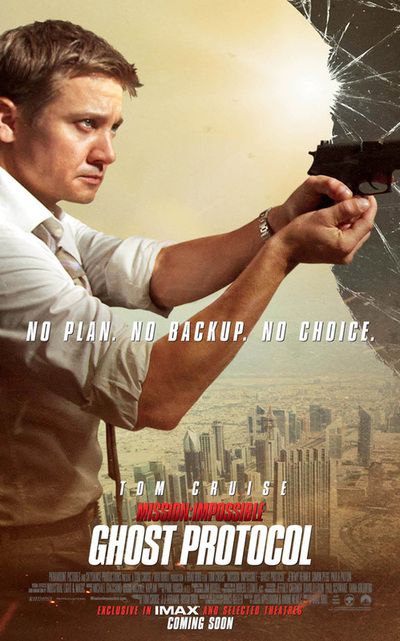 Tom Cruise (Ethan) and Ving Rhames (Luther) are the only two actors to appear in all the Mission: Impossible movies. However, the previous two movies — Ghost Protocol and Rogue Nation — have begun building a consistent team around Ethan and Luther with the addition of Simon Pegg’s Benji, Rebecca Ferguson’s Ilsa Faust, and to a lesser degree Alec Baldwin’s Alan Hunley (as the IMF Director). There is even a consistent villain presence between Rogue Nation and Fallout, with Sean Harris’ character Solomon Lane.

The missing piece is Jeremy Renner as William Brandt. He isn’t seen or even mentioned in Fallout. The film’s director, Christopher McQuarrie, blamed Renner’s omission on bad timing:

At the time, when the movie started, we didn’t really have a screenplay, so it was very difficult for us to say who would be in the movie for how long and on what days, and he had a commitment to Marvel. So there was just simply no predicting. If we had a finished script, we would have been able to say, ‘Yes, this will work and we can let you go for this time’, but there was just no predicting what those roles were going to turn out to be. It was just an unfortunate case of bad timing.

Personally, I’m not buying it. If it were just bad timing, they could have at very least mentioned Brandt’s name, and given an excuse for him not being available to help — thus making it easier to bring the character back in a future MI movie.

It’s also possible, given Renner’s price-tag for appearing, added on top of the high price of Cruise and addition of Henry Cavil, they just didn’t have the budget for a character that could easily be omitted. If so it’s a pity, but that’s the economics of Hollywood.