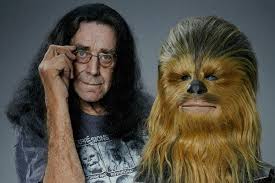 I was born in 1978.  I have never known a world without Peter Mayhew.  Until now.  I have never met the man.  I know very little about him personally.  What I do know is the joy he brought me throughout my life via his portrayal of the beloved Star Wars character Chewbacca.

I read an essay once about a writer taking her young daughter to an art exhibit and the little girl asking, “Who made this?  I have to talk to her.”  The author was pleased her daughter had made the connection between magic in the art and magic in the artist.  And so one must assume that Mayhew had a spark of magic, playfulness, joy, and creativity to be able to embody Han Solo’s furry buddy.

Some actors try to distance themselves from their most popular role (*ahem* Shatner), but from all the pictures I’ve seen on social media in the past day or so, Peter Mayhew truly enjoyed and embraced his association with/as the world’s most famous wookie.  As Luke reminds us in the trailer for episode IX, “No one’s ever really gone.”  We will always have Mayhew’s iconic performances to remember him by.

Yet it’s hard not to feel like the universe is a little less magic now.