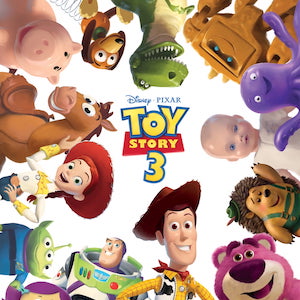 And so we come to the conclusion of the Toy Story saga…at least that was the plan at the time. Andy has grown up; he’s now seventeen and about to head to college. Obviously the toys are now accustomed to being neglected. The ones that remain are left in a cupboard but, with Andy’s imminent departure, his sister Molly has her eyes on his room and something has to be done about them.

The solution is that they are to be kept. However, they are to be kept in a bin liner in the loft apart, that is, from Woody who is off to college with Andy. Unsurprisingly, bag of toys in the loft would not make for a very interesting film so something has to happen. As is usual that “something” is a mistake. Mistakes happen a lot in toy story world; toys are mistakenly left behind during the house move in Toy Story, toys mistakenly end up in a yard sale in Toy Story 2, and this time the bag full of loft toys is mistaken for the bag full of rubbish and ends up outside waiting for the bin men.


You’ll Be Okay In The Attic?

Obviously, there’s a fingernail shredding escape from the bin lorry but the toys think they were deliberately sent for disposal. In a fit of pique, the rescued toys decide that they were thrown out deliberately and climb into a donations box. Woody goes with them to try and get them to come back and decide to live in a plastic bag in a dark attic…why Woody? Why‽ Still, off they all go to end up being donated to a pre-school daycare centre where things turn out to be less than rosy.  They are thrown to a pack of wild animals known as… toddlers.

I Know About Buzz’s Spanish Mode

They get bashed, painted, stamped and drooled on. They think that there is someone there to look after them but he turns out to be the biggest bad of a bad bunch. You thought the Stay-Puft Marshmallow Man in Ghostbusters was scary, wait until you see Lotso. Lotso (Ned Beatty) appears as a genial, friendly, bright pink, cuddly teddy bear. However it isn’t long before you realise that he’s actually as genial and friendly as Don Vito Corleone! He’s had a bad life at the hands of a child and he wants to make sure that no toy is hurt like that again. That sounds very benign but wait until you see his methods!

Anyway, at the beginning, I said that this was initially envisioned as the final chapter in the Toy Story saga and in a lot of ways it makes sense. We’ve been with Andy as he grew up and outgrew his toys. So it’s an obvious place to draw a line under everything. Those with a reasonable memory might recognise the final shot of Toy Story 3. It is a throwback to the opening shot of Toy Story which shows clouds scudding across the sky.

In Toy Story it is Andy’s bedroom wallpaper while in Toy Story 3 it is the actual sky; perhaps representing Andy’s transition from the safety of home to the big, wide world. Whatever, there was a definite wrapping up of the main story arc in a nice, wholesome manner. However, when a film brings in over a billion dollars it takes a lot of nerve to walk away!