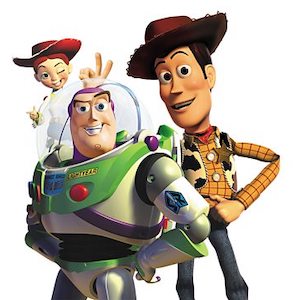 A couple of years later and along comes the inevitable sequel. But was Toy Story 2 so unavoidable? To be honest, there seemed to be some doubts amongst the powers that be at Disney. Initial plans were that Toy Story 2 was to be a straight to VHS release…it was the last millennium, after all, and stuff for home consumption came exclusively in book sized plastic boxes. Admittedly it went from hard back sized to paper back sized but this was before stuff arrived by magic through the ether.

Bo, Not In Front Of Buzz

Most of the Pixar talent were tied up with the next theatrical project, A Bug’s Life, and those working on Toy Story 2 had to go and work in a shed somewhere. Alright, maybe not a shed but a much smaller set up than they were used to. However, after the first few show reels Disney decided to upgrade it to a theatrical release. Despite Disney’s confidence in the project, Pixar weren’t happy and they decided on a, pretty much, complete rewrite which they knocked out over a weekend.

So, briefly, Toy Story 2 takes off after an unspecified, but relatively short, time following Toy Story. Andy is off to something called Cowboy Camp and is going to take Woody with him. A list minute bit of high jinx means that Woody gets damaged and has to be left behind.  While Andy is away his mum has a tidy up and some toys are accidentally put out for a car boot/garage/yard sale. One of them is Woody!

While out for sale Woody is spotted by a toy collector/dealer and, surprise, surprise, Woody is a valuable collector’s item. The collector is Al McWhiggin of Big Al’s Ty Barn and he’s not above stealing what he can’t buy. Then again, he’s voiced by Wayne Knight and we all remember what he was up to in Jurassic Park!  Obviously, a select band of toys led by Buzz Lightyear set off to rescue Woody.

The rest of it is another rollicking emotional ride. All the sites that record this sort of thing seem to consistently rank Toy Story 2 above Toy Story. That makes it one of the few films where the sequel is better liked than the original. There are a few songs, a few heartbreaks and a lot of laughs. In this household the most well received new addition was Jessie the cowgirl (Joan Cusack). This character bounces onto the screen like an absolute whirlwind and both my granddaughter and grandson simply love her.