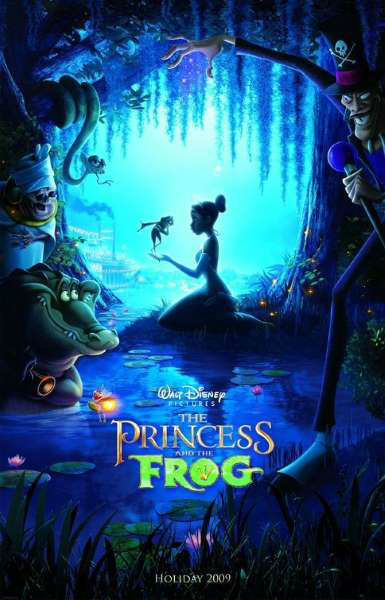 The Princess and the Frog is a suitably good and modern take on the “Princess” theme, with a jazzy little soundtrack and some true comedic moments. But is it moving? Inspiring? Maybe. Tiana, the Princess in question, is a good role model, with a solid work ethic.

Which makes me think…Tiana has a job. She works. Do any of the other Disney Princesses work at all, ever? Even the ones that aren’t royalty to start with seem to do…nothing. Belle, for example, apparently reads all day, to the amazement of the drooling illiterates around her. Cinderella worked hard, basically as a slave, but I wouldn’t call what she did a job.


Aladdin at least has a profession: petty thief. Most Princes only seemed to ride around the country, looking for sleeping Princesses to kiss. But, you know, this review should be about Tiana. 🙂

Tiana wants to own a jazz club in New Orleans, which is a nice achievable goal. She works at least two jobs to get to her dream, and her parents aren’t abusive, so it’s not like there’s an evil stepmother in the picture, for once.

Which leads to the villain: the Voodoo guy. He has no motivation in the plot except to be evil for evil’s sake, and he really drags the film down. His stuff is so boring I can’t be bothered to look up his name. I know it’s hard to make a good villain, but when Disney hits it out of the park (as with Ursula or Scar) magic happens. We start to care about the story.

In The Princess and the Frog, I only cared about the actual ‘frog’ sections, which are definitely delightful. The swamp scenes with the firefly and alligator are super fun, and emphasize the solid narrative message that looks can be deceiving. Prince Naveen is even quite ‘charming’ in his selfishness, and he has a nice arc with Tiana, who brooks no foolishness. Good for her.

But there’s the redneck scene, which is a kind of throwback to the stereotypical storytelling I’d expect from Old Disney, dragging the movie down. Ugh. (And that’s why their sequence makes a great Peetime, having nothing to do with the plot and offering very awkward humor.)

So…I’d call this a middling Princess film. I was pleasantly surprised how Disney incorporated a lower class American heroine that wasn’t in love with a man because he was attractive and royal. And I liked how Naveen was sort of a brat, who grew to love Tiana for her personality, not for her beauty.

Altogether, The Princess and the Frog is a nice movie that showcases a young woman of color in a way that never feels racist: her story is not about skin at all, unless you count the green froggy kind.

About The Peetimes: If you can hold off for the Recommended 2nd Peetime at 51 minutes, you won’t miss any songs, and the scene in question is really quite dumb. We also provided an early Peetime at 40 minutes in case you really need it (it includes a minor song).

There are no extra scenes during, or after, the end credits of The Princess and the Frog. (What we mean by Anything Extra.)