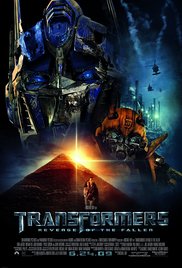 The sequel to the 2007 blockbuster “Transformers” is out and it is rockin!

When I see trailers for movies I decide (because of my ever-shrinking budget) whether it is going to be a “wait for the DVD” movie or “go see it in the theatre” movie. Transformers: Revenge of the Fallen” was a “Go see it in the IMAX, baby!!!” And I am certainly glad I shelled out the extra bucks to do so. Getting caught up in the special effects and sound was worth it, because that is at least half of what make this movie so great! I am not saying it in the snide, put down way that “bite the hand that feeds you” Megan Fox did. (What the heck was she thinking?)


The movie critic “Movie Mom” said of the 1st Transformers “the robots are just so cool!” She was right then, and it hasn’t changed now. They’ve gotten even cooler with way more personality.

Let’s talk personality. Bumblebee – come on, that is one hot car and if he were human I would totally want to date him. Courageous, loyal, sensitive, strong – everything a woman wants. But there was one thing in the movie that confused me; what happened to his voice? They made a big deal out of giving him James Earl Jones’ voice at the end of the first movie and gave some lame excuse as to why it doesn’t work now. Don’t get me wrong, I adore him without the voice, he expresses way more through radio and song – but it was a little cheesy the way they glossed it over. And while I am pet peeving on this; James Earl Jones as the voice for a hot car like Bee? No way! JEJ has the voice for Kings and Gods, not a hottie like Bee. Let’s think along the lines of Samuel L. Jackson, or Ice T., or even Vin Diesel. That would be a tough voice!

I’ll go ahead and get my other problem with the movie out of the way. This is not quite a spoiler; but if you haven’t seen the movie yet, skip this paragraph. I could have thought of at least 3 different ways to help Sam in the desert without going all mystical like they did (OK, 1 and if I thought really, really hard I could come up with 2 others, but you get my point). It reminded me so much of the way The Matrix was ruined by trying to take it to some “higher purpose” when the purpose was already high enough! Come on guys, is uniting 2 alien races not enough for you? We can’t even get peace on one planet; I would think engendering trust between 2 planets is a huge deal. Why the great beyond stuff?

OK – spoiler part over, you can read again.

Sam’s Mom: this woman is hilarious! Between crying over sending her only child to college and sampling some of the “special” brownies being sold at the bake sale – she will have you dying. Do not drink too much Coke, you will have to go to the bathroom from laughing so hard.

The Twins: they almost destroy as many things fighting each other as they do the Decepticons, but do not attack one of them. They are brothers, and you do not mess with brothers.

Transformers hiding: just like in the first movie, the Transformers attempt to hide. I have no idea why I find this so funny, but I do. It reminds me of my 6 year old standing up straight as he can behind the tree in hopes I won’t kill him for using my china for flying saucers.

Sam: he is just great. Every tiny expression is perfect. You can tell just how nuts he thinks his roommates are to just how devastated he is by a great loss he experiences, and how much guilt he feels over this loss.

Bumblebee: I love this car, I want this car. I will even take the old beat-up version of this car as long as I get one that cries when I say I am going to leave him behind. Oh and that comes out shooting military grade bombs at any adversaries. I think he would be great in Atlanta traffic.

The plot was not great in this movie. There were some pretty Swiss cheese type holes. But the acting and the special effects more than made up for it in my opinion. Michael Bay was not going for Drama of the year or an Oscar with this film, he was looking to give us all a good time – and he succeeded with that spectacularly.

Can I have my Bumblebee now, please?

Transformers: Revenge of the Fallen is rated PG-13 for intense sequences of sci-fi action violence, language, some crude and sexual material, and brief drug material. The twins’ language is particularly “street” foul language. I would definitely pay attention to the “13” part of it. Your 5 and 6 year olds are going to beg to see this because it looks so cool, but unless you want to spend the entire movie going “don’t repeat that” – then you will probably want to hold off until the DVD version.

What do you think about Transformers Revenge of the Fallen? Share your thoughts about the movie in the comments below.