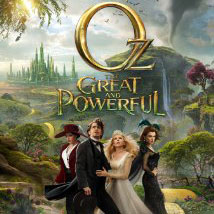 Visually it’s a stunning movie. Regrettably I didn’t see it in 3D – because it’s hard to take peetime notes with those glasses on – but tomorrow I’m going back to see it with the family in 3D. ( I’ll update this review with my 3D thoughts later. )

The set designs were incredible. You get to travel to China Town where the houses are teapots and saucers; the town had been destroyed and the sound the broken china made was fun to listen to. The Dark Forrest was perfectly spooky. I could go on and on about how cool it looked and sounded but you get my drift. It was amazing.


It was a fun story. I thought they did a good job but they had some casting errors. I love James Franco, and he did an admirable job, but I couldn’t stop thinking about how perfect Johnny Depp would have been as Oz. ( I know, Depp can’t perform every wacky role but that won’t stop us from wishing he would. ) Franco had so many of Depp’s mannerisms and facial expressions that I felt like he was channeling the Great and Powerful Johnny instead of Oz.

Where my complaint about casting really comes in is Mila Kunis. She was totally wrong for the part. I didn’t feel anything from her on screen. She played her part with the lifelessness of driftwood. Even the make-up job fell flat on her.

I would like to briefly follow that up with some praise. Rachel Weisz as Evanora and Michelle Williams as Glenda were incredible! Weisz was witty, sarcastic, sexy and diabolical. Williams was angelic, radiant and confident in her role. They were the shining stars.

I would recommend this movie to all my friends and family. Don’t make my mistake though, see it in 3-D the first time.