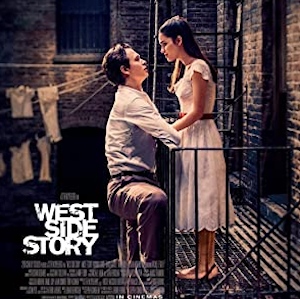 I love West Side Story, even though it’s a sad, “bring tissues” type movie. My love, however, seems restricted to the 1961 West Side Story movie, and the play. While I haven’t seen this on Broadway (and there’s a sly nod to Broadway in the first three minutes of the 2021 film — did you catch it?), I’ve personally played the role of Anita. Which was great fun, but neither here nor there, except to prove my West Side Story credentials.

So while I say that the original film version is an A-grade movie, I’m going to admit disappointment with Steven Spielberg’s 2021 attempt. I don’t know what happened here; Spielberg is absolutely more reliable than this. This was probably a passion project for him, but somehow the new version sucked all the air out of every scene. I didn’t feel anything. I basically waited for WSS to be over.


I still cried — it’s an awful, tragic story, based on, you know, Romeo and Juliet — but then, I’m an easy crier.

If you’re going to take on a renowned classic, the reboot needs to give us something magical. It doesn’t need massive plot changes, gender flips, or updated milieu, but there should be a reason the new film exists.

I just did a rewatch this week and was super impressed with how it holds up with grace and relevance to our times. There were amazing stylized, unforgettable moments that popped on the screen, with a use of color, framing, direction, and light that sold the setting and emotional turmoil of the characters. One notable swing-and-miss was the wedding scene. In the original, it’s clear from the set lighting and cross symbolism that this is a “real” wedding in the eyes of God.

The humor with Maria and Tony in the dress shop (setting up the mannequins) wasn’t even there. In fact, there wasn’t any humor in this 2 1/2 hour slog. I’m not saying this was a bad movie. I just think it’s meaningless. It didn’t add to the catalog or genre any more than the reboot of Footloose did.

There were some oddly-placed lyric changes that took away from the excitement of hearing and seeing some of these well-beloved Stephen Sondheim songs. Mainly I noticed America and I Feel Pretty being changed. Did the latter remove the “I feel gay” phrase to better jibe with the times? Does anyone know if these are legit alternate lyrics?

I was also disappointed with the characters. I’m not sure if it was an issue with casting, chemistry, or the script, but everyone either fell flat or was barely there. Ice? They took away his big Cool number. Anybodies had a small arc as the girl who proved herself to the Jets, but it all went by so fast. It would have been nicer to expand that. Bernardo was a humorless jerk, Chino was a cipher…and even Anita, powerhouse woman of the tale, was kind of bland here. Riff, the leader of the Jets, lacked charisma.

Tony and Maria were serviceable. They looked the parts, sang well enough.

Overall, if you’re a big fan of West Side Story, by all means, see this in the theater. For everyone else, wait to stream it (and then compare with the original for fun). The message is timely, crucial, and extremely relevant. Agonizing race divisions are still with us, from Shakespeare’s age through to our times. We just don’t express it through song and dance. ;-(

About The Peetimes: Peetimes were challenging. I’m going to assume you’re here for the classic song & dance numbers — and there’s a song every few minutes. I do have 3 good Peetimes for you where you don’t miss much, nicely spaced out, plus a 4th emergency Peetime after the 2nd hour.

There are no extra scenes during, or after, the end credits of West Side Story. (What we mean by Anything Extra.)

Plot
An adaptation of the 1957 musical, West Side Story explores forbidden love and the rivalry between the Jets and the Sharks, two teenage street gangs of different ethnic backgrounds.

chevron_left Non-Christmas Christmas Movies – Kiss Kiss Bang Bang
Is there anything extra during the end credits of West Side Story? chevron_right