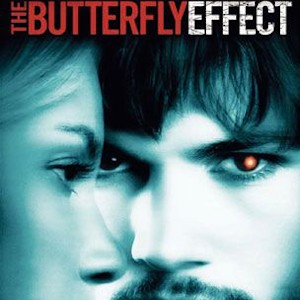 So as Groundhog Day rapidly approaches the people of the United States (honestly, before the film, I’d never heard of it and I think that is true for most people outside the USA), we’ve been doing rewatches or reviews of films that use the time loop trope. Some fit the Groundhog Day format better, while others are peripheral at best. The Butterfly Effect definitely falls into the latter category, but that’s not why I’m not including it.

Very briefly, The Butterfly Effect is about Evan Treborn (Ashton Kutcher), who keeps blacking out at traumatic or stressful times. This isn’t so much a self-preservation device, but holes in time, which Evan can go back to and fill in how he chooses — causing a different outcome.


A clue is in his name; Evan Treborn = EvanT reborn = Event reborn. Apparently though, the original name was going to be Chris Treborn but the powers that be battled out over that one.

The Butterfly Effect is not a time loop-based film. It’s more of a loose series of “what ifs” based on a loose interpretation of Chaos Theory. If I go back and turn left instead of going straight ahead, let’s see what happens. Now let’s go back and try turning right, turning around, jumping up and down, pro re nata.

There’s no apparent starting condition and there doesn’t seem to be a resolution situation. So definitely not a Groundhog Day type film.

Is it the talent that’s lacking? Not desperately. While Ashton Kutcher might not be the first name to spring to mind when you’re casting Hamlet or Waiting For Godot, he’s a capable performer. The rest of the cast might not be the most immediately recognisable but they all seem to be working regularly. The directors are less experienced as directors go, but have a wee bit more grounding as writers, but — if I’m honest — it’s more a question of the content rather than the quality that I didn’t like.

So What’s The Problem?

The things I didn’t like about The Butterfly Effect are, mainly, the plot point where one of the traumas Evan is suppressing is when the father of his friend, Kayleigh, makes them make pornographic videos while they are just seven years old.

I know that I may come across as a wishy washy, sandals wearing, Guardian-reading socialist — and, in all honesty, that’s not too far from the truth — but one of the things that pushes me to the right is pædophilia; I would pull the trigger myself. Obviously, being British, I haven’t had the practise and would probably miss, but the intention is there.

And the second thing I really can’t abide is cruelty to animals. Alright, I know it’s all effects, and shooting is monitored by whatever the local version of the RSPCA is, but I just don’t like it, and I especially don’t like dogs suffering… I had to stop watching I Am Legend when the dog got infected, and stuff like Marley And Me never even gets started.

So why is there a need to demonstrate how screwed up a kid is by having him burn a dog to death? Also, that ending. I don’t want to spoil it — and they might have changed out the one I saw in the theatre — but the one I remember is beyond horrific.

So, apologies to all concerned, but this one isn’t for me.