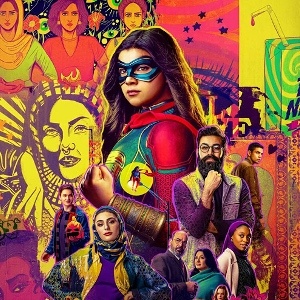 Marvel are opening more doors! They’ve taken another comic book character and created a new series around them. This time, though, the character is a teenaged Muslim girl, played by a first-time actor.

Who Is Ms Marvel?

Ms Marvel is the alter ego of Kamala Khan who worships Captain Marvel to the point of playing her at cosplay events. She feels out of step with the others at her school for a variety of reasons. But when she develops superpowers she can’t help but wonder where they came from: are they real, or is it just her powerful imagination?

As this is a mini-series rather than a film there are a number of directors responsible for a few episodes each; Adil El Arbi and Bilail Fallah (Bad Boys For Life), Meera Menon (For All Mankind, The Walking Dead), and Sharmeen Obaid-Chinoy (Saving Face, A Girl In The River). Between them there is a wide range of award-winning directorial skills.

The story was created for television by Bisha K Ali who had previously contributed to the TV series’ Loki, Four Weddings And A Funeral, and Sex Education.

The series was launched on Disney+ on the 8th of June 2022, with new episodes coming out each week for six weeks. Apart, that is, from Pakistan: it had a theatrical release on the 16th of June due to Disney+ not being available there.

In the lead, we have Iman Vellani as Kamala Khan/Ms Marvel. Iman is a newcomer but acquits herself marvelously in the role. It might just be me but there were times when she reminded me of a young Maisie Williams around the time she was becoming a global megastar portraying Arya Stark across the entirety of Game Of Thrones.

Alongside Iman are her school friends Bruno (Matt Lintz – The Walking Dead, Pixels, The Alienist) and Nakia (Yasmeen Fletcher – Let Us In, Upside-Down Magic).

Characters, So Far, In Ms Marvel

As well as the main protagonists there are the Khan family (several generations of them), The Clandestines, the DODC, and the Red Daggers. These are various factions who are either protecting or attacking Ms Marvel depending on where you are in the story!

Kamala Khan lives with her very protective family in New Jersey. She suffered at the hands of the ‘popular’ kids at school because she is seen as being geeky, thanks to her fascination with Captain Marvel. There is a big cosplay competition coming up and she will be entering with the help of her friends. At least, she thinks it is only cosplay…

This is a Marvel production and, because of that, there is a mid-credit sequence after the last episode. Obviously, spoilers forbid me from saying what happens but, immediately afterward, it does say “MS. MARVEL will return in THE MARVELS” — but that’s not due out until November 2023.

chevron_left Is there anything extra during the end credits of DC League of Super-Pets?
Contact – Silver Anniversary Movie Rewatch chevron_right