There are 2 extra scenes in this movie. The first extra is about 3 minutes into the credits, after the animated credits are complete. Then another at the very end.

Both are hilarious and worth staying for.

The credits run for approximately 9 minutes. 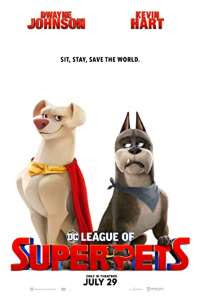 We have 2 Peetimes for DC League of Super-Pets. Learn more.

About The Peetimes
I would really recommend the 2nd Peetime. It’s a sad scene that made a lot of the children in my theater cry.

Plot
When the Justice League are captured by Lex Luthor, Superman’s dog, Krypto, forms a team of shelter-pets who were given super-powers: A hound named Ace, who becomes super-strong, a pig named PB, who can grow to giant-size, a turtle named Merton, who becomes super-fast, and a squirrel named Chip, who gains electric-powers.