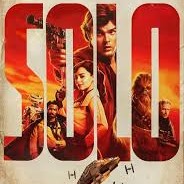 He’s got a really good feeling about this.

I don’t know why so many Star Wars fans have a problem with Solo. All I can think of is that it was released too close to The Last Jedi, which really incited the fan base. Otherwise, I can’t imagine why this excellent film was panned. I loved it, and I’m not sure yet where I’d rank Solo, but in the top four or five of the Star Wars films, at least. (Okay, I added my ranking on the link above. Feel free to disagree and tell me why I’m wrong, in the comments below.)

I recently re-watched Solo on the seat back of my cross country Delta flight, and I was delighted. It’s definitely better the second (or third, or fourth) time around, and what’s nice about the seat-back thing is that I could pause it and rewatch the little random and funny moments to my heart’s content. I paused it a lot: watching joyful references to previous Star Wars movies, and I laughed out loud several times (probably annoying my seatmates).

What was so great about Solo?

It was a rousing adventure with several great villains, lovely set pieces, and a likable cast. We’re introduced to a young, wet-behind-the-ears Han, who’s still idealistic and dreams big. Over the course of the film we start to see his trademark cynicism kick in, culminating with Han definitively shooting first. But he’s so sweet and baby-faced here, and so willing to be a hero. It’s a nice contrast, and I can see why he both felt frustrated by and protective of the young Luke Skywalker — it reminded him of himself, back in the day.

The new Han actor is a special find, and I’m thrilled with his performance. Harrison Ford gushed over him (and Ford is a normally taciturn man), and told him — when Alden Ehrenreich was cast — to make Han his own. I think Ehrenreich walked a good line between an homage to “old Han” and a gentler, fresher version. It worked for me. Plus, he had great chemistry with the new Chewie, and most of the laughs came from their early friendship (the rest of the laughs came from Lando, but I’ll get to that in a moment). The scene where Han and Chewie shower together, especially, is really cute. (Now there’s a sentence I never thought I’d write.) Chewbacca has always been a grounding force for Han, operating as a sort of conscience for the experienced smuggler he becomes.

Solo was fun and the characters clicked

The ensemble sparkled, unlike the problems inherent in the characters of Rogue One (come on, admit it). Q’ira is a complex love interest, and adorable to boot. Her story arc is sensible, sad, and intriguing. Woody Harrelson’s Becket made for a great conflicted mentor, kind of like a less reliable version of his Hunger Games Heymitch character, if that’s even possible. Paul Bettany’s villain is outstanding, period — he’s amusing, personable, complicated, and very, very frightening.

Which brings me to Donald Glover’s Lando. Dear God, the perfection. He effortlessly stole every scene he was in. I could view an entire movie of Lando playing Sabaac, or trying on just capes, and be entertained. Can our next Star Wars Story feature him? Please?

Lastly, the Millennium Falcon was a big character in Solo. She’s always been a fast ship — when she worked — but that’s because of Han’s special modifications over the years. Here we see the Falcon as a brand-new, squeaky clean ship, with all the bells and whistles and wet bars and cape closets. It’s amazing to be presented with a white-walled interior after all the grungy years.

The ensemble absolutely sparkled, and I’m left wondering, again, why people didn’t like this movie. Maybe it was the coaxial heist plot, which wasn’t all that exciting. Coaxium, hyperfuel, whatever: it’s just a MacGuffin to hang the narrative on. Solo is a small-stakes story, which is just fine after so many retread Death Star plots. It doesn’t always have to be about saving the universe to be a great movie.

Honestly, I think people were so irked with The Last Jedi that they “voted with their wallets” and took it out on Solo. And that’s a damn shame. This is one of the better films in the franchise.

Lastly, I wanted to make a note about the muchly-heralded escape from the Maw in 12 parsecs (nice correlation to the old Extended Universe novels, BTW). It’s not the most exciting element of the film, and doesn’t feature Han doing anything particularly skilled. As RunPee Dan said in his review, “It’s a group effort.” I have no issues with that, since Han said “It’s the ship that made the Kessel Run in 12 parsecs.” The ship. Not that he’s the big bad pilot that did it. His off hand comment allows for what actually happened, instead of being a misleading boast. Han has many flaws, but he’s never one to mislead others.

It also puts to bed the problem with parsecs being a measurement of space and not time. It worked for me, mostly…but I won’t lie and say the Kessel Run sequence doesn’t make for a great Peetime. The Maw’s effects weren’t up to the standards of Star Wars, and the space dwelling monster was just plain atrocious. I prefer the asteroid-based space slug from Empire, if we have to have an impossible creature feature. 😉

While there were a lot of super fun nods to the original trilogy, I have to say my favorite was Han saying, “I have a good feeling about this.” I found it cute, and it made me smile. I think I need to make a list of every character in the rest of the series intoning, “I have a bad feeling about this.” (UPDATE: I DID IT HERE.) Which, yeah, bad things happened indeed, but it was a pleasure to see a Star Wars film where people were kind of having fun, for once.