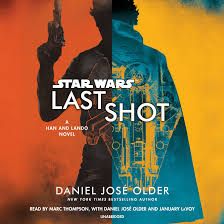 With the arrival of Solo —the newest Star Wars Story set to splash on cinema screens — pretty much the entire galaxy is primed to learn more about Han Solo. Just how did he fall from expert Imperial pilot to a petty criminal in a seedy underworld? Lots of pre-canon material is out there in book form, detailing how he met and saved the faithful Chewie, how he won (or cheated?) the Millennium Falcon out from under Lando Calrissian [pullquote] …and how the frak the Kessel Run was made in less than 12 parsecs (which, as we know, is a unit of distance, not time).  These are things Solo is expected to show.[/pullquote]

Now here’s the first completely canonized Han Solo book, to fill in the gaps the movies don’t cover. It’s called Star Wars: Last Shot (A Han and Lando Novel), written by Daniel José Older. Apparently it delves into Han’s (and Lando’s) past and future. And like Han and Lando, the book is breezy, snarky, and funny.

[pullquote position=”right”]What’s challenging, structure-wise, is how the novel will make a coherent story without rehashing or rewriting established moments from these men’s lives that we haven’t already seen –[/pullquote] not in the original trilogy, the new Solo film, and the slowly growing bookshelf of canon novels. If Last Shot is going to be weaving four viewpoints around (young Han, young Lando, mature Han, and mature Lando), telling a credible, interesting tale with all new information sounds somewhat impossible. (But hey, never tell me the odds!)
-----Content continues below------


According to Amazon reviewers, Last Shot manages all these things, and gives us plenty of insight to our two most-beloved galactic scoundrels. And, of course, Chewbacca.