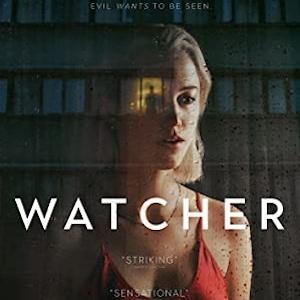 Let’s start off with, Watcher was a decent movie. I enjoyed it, but their marketing team might have set up some wrong expectations. Let me explain…

The trailers kind of come across as a horror flick. Not as a slashy, gory, or monster kind of horror but a horror movie. IMDB has it listed as a drama, horror, thriller. Where Google has it as a drama, mystery. So I can agree with both that it is a drama. Mystery and thriller I can get behind those. I would use suspense instead of horror. To the right person, it might trigger some horror-level fear. But if you don’t meet that specific criteria, or you are coming in expecting horror, you might be disappointed.


I am also going to agree with Christene (RunPee Sis) that it is a slow-burn movie. Probably too slow for some. This is where our reviews will start to differ. Be sure to check out her review of Watcher. She is definitely harsher on the movie. But it is good to see a different take on it.

Watcher does take its time to try to build the tension through mystery and drama. I completely understand if it doesn’t hook you or if you don’t get in the right mindset, you’re going to be bored. Remember, it is a slow burn.

I found it to be reminiscent of older movies and TV shows. Where they couldn’t show graphic things and they had to put the drama/horror more in your head. Back then they would have called it horror based on the story being told. Less flashy and quick cuts like most of today’s movies.

By no means is Watcher on par with Rod Sterling or Alfred Hitchcock but I found the vibe of Watcher in that vein. Look back at Alfred Hitchcock’s classic Psycho. How much did we really see? It implied violence off-screen and hooked the audience.

What did Watcher do right to even be mentioned next to the above legends? First off, they played on the fear we drive into young girls and women’s heads: always be on the lookout; someone might be watching you; someone might be going to hurt you, kidnap you or worse;

So that is the main hook. If you’ve never experienced that feeling or even thought about it. Or willing to put yourself in the mindset that some people have to live like that. You might miss the hook. But those that can or have that mindset will be the ones that feel the horror and scare factor of Watcher.

Secondly, they also played on the fact that not everyone believed her. Was it just in her head? Was she overreacting and just imagining it? Was it stress over the move and life’s new situation? You don’t get that answer till near the end of the movie. I suppose I’m getting a little ahead of myself. Let me cover something quickly.

American Julia (Maika Monroe) has followed her partner Francis (Karl Glusman) to Bucharest, Romania, as he begins a new job. She currently isn’t working so has a fair bit of time alone. The language barrier and a new city definitely add to Julia’s feeling of isolation and loneliness. Francis’s long hours at work are not helping either.

The movie is from Julia’s perspective. We are right there with her seeing the fear building in her. With no subtitles when people are speaking a different language. Again we are right there with her and don’t know what others are saying. (Unless you happen to speak that language of course). She has to rely on the kindness of others who speak English or broken English. But are they telling her the truth? Sometimes you can see the doubt in her face. The people walking in the background are slightly blurry. The person in the window is mostly a silhouette. The audience can’t identify if it is the same person or not. We see, and hopefully feel, the frustration when Francis, the police and others don’t seem to believe her.

So that’s the meat of it. We as the audience have to identify with Julia. If you can’t or don’t, I’m not sure what you’re going to get out of the movie. As a matter of fact in the screening that I saw, there were some obvious teenage boys that were laughing at her situation.

Drama, mystery, thriller, suspense. That’s how I would classify this movie. So once I got out of my horror expectation. I was able to enjoy the movie a lot more. As I said it reminded me of some older classic styles of storytelling. For that reason, it got some bonus points from me. Is it going to grab the mass audience every time? No. Therefore it’s losing some points on that. It did a few other things right in my opinion that earned it some other bonus points. Now we’re slightly above average. Hence the B-. I think it’s worth a watch if this kind of movie would interest you and you’re in the right headspace or mindset.

Tell a friend to see it?
Yep. If I think they would enjoy the ride Watcher gives.

Would I rewatch it?
Maybe with the above friend. On my own… I don’t think it needs a rewatch. After a few years maybe.

Must-see in theaters?
No

About The Peetimes: There are 2 perfect spots to go. Both Peetimes we’re easy to summarize and get you back in the seat before the finale begins.

There are no extra scenes during, or after, the end credits of Watcher. (What we mean by Anything Extra.)