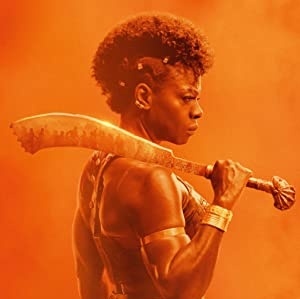 The Woman King is a historical epic story of the Agojie, the all-female unit of warriors who protected the African Kingdom of Dahomey in the 1800s with skills and a fierceness unlike anything the world has ever seen. Inspired by true events, The Woman King follows the emotionally epic journey of General Nanisca (Oscar®-winner Viola Davis) as she trains the next generation of recruits and readies them for battle against an enemy determined to destroy their way of life. Some things are worth fighting for.

Now let me start off with, I cannot speak to the historical accuracy of this movie. I assume it’s a story-fied version of history, similar to Braveheart, Gladiator, 300 or even another 2022 movie Medieval. So history buffs, feel free to tell the world how different the movie is versus history. That’s not going to be this review. Story-fied history can be interesting to watch sometimes. I can see how pieces of history inspire some epic tales next to the campfire, long ago. Even back then, certain liberties might be taken to tell a good story. My assumption is, like those other movies listed above, certain liberties were taken. But that really doesn’t matter to me. How does the movie do / resonate with a modern audience?


I thought they did a really good job. It definitely had some drama moments. It wasn’t just all action and fighting. Some of the fighting sequences/choreography were pretty spectacular. But I did find myself during the fighting choreography questioning whether or not warriors of that place and time really knew some of those fighting techniques. I thought I saw a few martial art styles that seemed out of place. But again if they’re storifying history, why not take liberties also with the action, to appease modern audiences. So I’ll give them that but I did have a couple of moments of “would they really know how to do that?” Again minor but I noticed it. As for the audience around me they laughed, they got emotional but most importantly they got jazzed up. The energy level in the room seemed to intensify. Like people’s adrenaline was starting to kick in. People that were emotionally vested definitely came out on a high note. For those that remember when the original Fast and the Furious first came out. When leaving the theater, there was a buzz and excitement level around. Let alone, it seemed like everyone thought they were now race car drivers. LOL. At least that was what I witnessed back then. I found this being similar to that. Most people came out excited and buzzing with energy. Different aspects spoke to different people. Whether that be the overall story; the mostly POC cast; strong female warriors; the fight for personal liberties and freedoms; etc. If you get invested in this movie, it seems to spark something. Now there are a few audience members that were commenting on the way out. They felt the movie was a little too long and some scenes felt unnecessary to them. The scenes they’re talking about, I believe we’re showing the bond between the warriors and taking a moment to enjoy life. But I can agree that maybe those moments didn’t push the story forward. Did the story need to be pushed faster? I had no problems with those scenes. The only other thing that some audience members might have problems with. If you’re not used to hearing other accents spoken or have hearing problems. Sometimes the dialogue was quiet, which could have been even harder to understand when you add the accent on top of it. I made it through okay but I could see some having concerns. My local theaters (AMC) offer Assistive Moviegoing options. If you have vision or hearing problems, see if your local theaters have something similar to help you.

With only a few of those nitpicky things. My rating is pretty good. Overall I really enjoyed The Woman King. It fits right up there with those other storified history movies that emotionally moved us. It was fun to see a crowd get that jazzed up. Will The Woman King have a scene that we will socially remember for years in the future? I’m kind of excited to see if it does. Kind of like a certain rallying speech… “They may take our lives but they’ll never take our freedom!”

Would I rewatch it?
Yes

Would I want to own a copy?
Yes

Must-see in theaters?
My gut says yes for the communal viewing experience. But the story could transfer to the small screen.

About The Peetimes: I found 4 Peetimes. The 2nd one is for emergencies. The 3rd and 4th ones are recommended.

There are extra scenes during, or after, the end credits of The Woman King.

Plot
A historical epic inspired by the true events that happened in The Kingdom of Dahomey, one of the most powerful states of Africa in the 18th and 19th centuries.