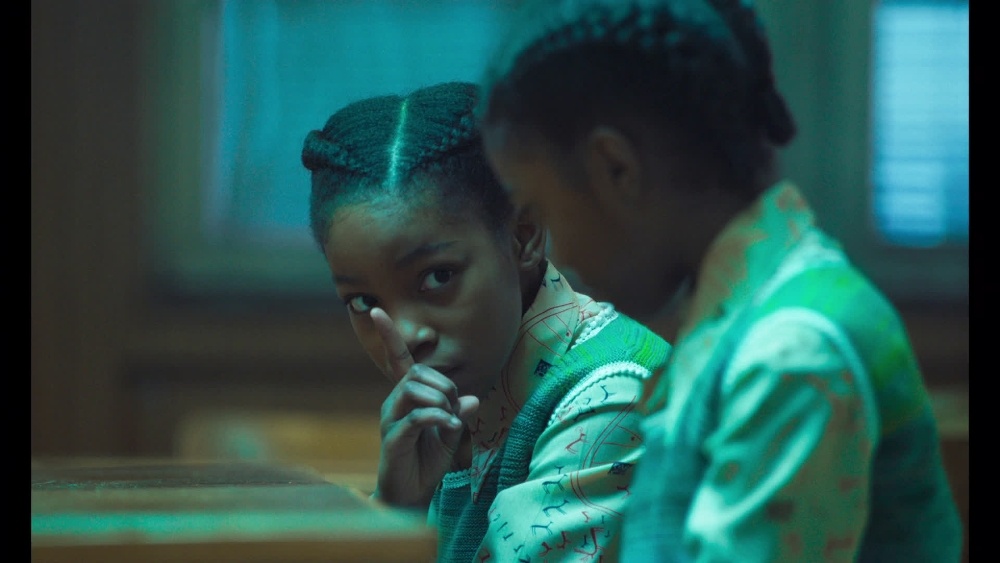 Adapted from the 1986 book by Marjorie Wallace. The Silent Twins is a creative but strange biopic of June and Jennifer Gibbons. That is quirky and whimsical in some places, yet cold and somber in other places. The British twins communicated only with each other and through their creative play/stories/writing. Text at the end of the film indicates that the Gibbons’ written work has been incorporated throughout, including their poems, novels, and short stories. In the movie, their stories are usually brightly colored and very imaginative in contrast to the rest of their world which is cold, dim, and harsh. The film doesn’t bother explaining why the sisters are the way they are. Was it from sheer stubbornness, from trauma, or mental illness? The film will not answer that clearly. It simply grants us access to their interior world without much explanation. Leaving the audience to dive into this heavy drama films’ deep-end, sink or swim. I say sink or swim because are you just going with the flow of the movie? Or do you want a clean narrative? This movie is clearly not going to be everyone’s cup of tea. Let’s dive in a little more.

Aspects of this movie are artfully done and creative like the stories the girls tell. The music, the soundtrack, stop motion animation, etc. I appreciate the creative ways it was being done. It was a great yin and yang or back and forth between the experiences the girls were having that were cold and a little lifeless towards the rest of the world. Which was used to try to draw the audience into the twins’ personal experience. You, the audience, had to be willing to go with them on their journey versus being just told their journey. This movie lacked some clear-cut explanations or clear story development. They leave aspects either not on the table at all or for the audience to fill in the blanks and do some work for them. To the right audience member, that would be awesome. To the wrong audience member, you look lazy and the movie looks like a jumbled mess and with no clear-cut narrative. Also, I witnessed four people walk out of the movie during it. Others, while walking out at the end, clearly loved it and thought it was the best. That only helped emphasize my next thought. Some will go and say “movies shouldn’t have to spoon-feed the audience”. While others would go “learn how to tell a clear story”. Both aren’t wrong. I personally can agree with both aspects of this movie. Art is subjective and comes down to personal perspective. Where will you land on this one? For that matter, where did I land on this one?


For some of my uncertainties above, I need to acknowledge that it could have been my personal viewing experience. It was in a theater I don’t normally go to. The screen was a little smaller than I am used to. I maybe wasn’t in the best seat for viewing some of the notes being written back and forth or text on the screen. So I missed some of the things. I think the movie did fine without me being able to read that but I found myself a little lost in what was happening or being said. If they did a clear zoom-in image, it might have been better or a closed caption description of what was being written could have helped. Speaking of closed captions, (again was it just the theater and my personal experience) the twins spoke with almost a lisp. Also to keep with the tone of the movie spoke very quietly or in voice-over style whispers. So I found it hard to hear and understand them all the time. Maybe the voice track needed to be turned up a little bit and the soundtrack/music turned down, I don’t know. So a closed caption could have helped me again. If this was a home viewing experience, I probably would have turned up the volume more and turned on closed captioning. We don’t usually have those options in the theaters but maybe I could have had some assistance. If I knew that going in, some of my local theaters (AMC) offer Assistive Moviegoing options. So I could have gotten some closed captioning. Maybe one of those options could help you if you have vision or hearing problems, see if your local theaters have something similar to improve your movie-going experience. I definitely could have used it for this one.

In conclusion, there are many aspects of this movie I liked and enjoyed. It definitely had other parts that were hard pills to swallow. Again I can’t put it all on the movie, some of it might have been my personal experience. I don’t know for certain. But what I can say is I know this movie is not going to be for everyone. It’s one of those I think that’s going to be a love it or bored/confused kind of movie. The mass general audiences I don’t think are going to accept this artfully done movie with a slightly jumbled narrative. So how do I rate this… I have some friends that I think would call this an A+ movie or at least an A. Others would put it at an F or like someone else on Runpee did, WTF. So I think I am going to go a bit of the middle ground for my overall rating.

Tell a friend to see it?
Definitely not a clear cut yes or no. I would need to have a discussion.

Would I rewatch it?
A heavy maybe on this one. Giving the movie the benefit of the doubt that my theater experience is swaying my opinion too much.

Must-see in theaters?
As mentioned in the review, (unable to see or hear somethings, was it my theater experience) maybe a pause button and close captioning could have helped. I think the story could transfer to the small screen.

About The Peetimes: I found 3 Peetimes. I recommend the 2nd Peetime. The 3rd Peetime is an emergency only because a new character is introduced just after the time ends.

There are no extra scenes during, or after, the end credits of The Silent Twins.

Plot
Based on the lives of June and Jennifer Gibbons, real-life identical twins who grew up in Wales and became known as “the silent twins” because of their refusal to communicate with anyone other than each other.

chevron_left Movie Review – The Woman King
Is there anything extra during the end credits of The Silent Twins? chevron_right