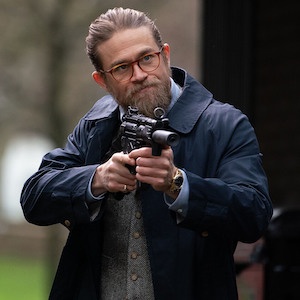 Guy Ritchie returns to where it all started: the Brit Gangster flick. Albeit, this time with an American lead. I don’t know if Matthew McConaughey was first choice for the lead but, to my mind, he fits it well as the trailer trash Texan who made it to the upper echelons of English society via a Rhodes Scholarship and a talent for selling weed to his upper class chums.

To my mind though, the real star is Charlie Hunnam as his effortlessly scary right hand man, Ray. At the risk of exposing my ignorance, I admit I had to look up his IMDb page to see what else he’d done, and was surprised to find out that he’d been in quite a few things I’d already seen without noticing him. Whether this says more about his chameleonic acting skills or my lack of observation I decline to expand upon.


There were plenty of other acting treats to enjoy. Colin Farrell as Coach was the best I’ve seen him for some time. Jeremy Strong was chilling as the delightfully effete threat to Mickey Pearson’s retirement plans. And as for Hugh Grant and Michelle Dockery, it was like they were in a “Posh? Me? Nah mate; I’m as common as muck, me,” competition both affecting Cockney/Estuary accents; Hugh Grant’s with a little extra ‘camp’ thrown in.

The thing that might put some people off is the language. If you have a particular problem with the ‘C’ word (and I don’t mean codswallop or cor blimey!) then you might find the 20+ uses of the word a bit much. Having said that, I did manage to get about a third of those in one Peetime! If you need to take a positive from this, I suppose it’s that you don’t notice the ‘F’ word so much again (I don’t mean fiddlesticks or flipping heck).

Basically it’s a case of if you liked Lock, Stock and Snatch you’ll like this. Twists and turns, surprises, humor, and action, pretty much from start to end.

Oh! See if you can spot the signs Guy Ritchie has made it during the opening scene and its repeat!

About The Peetimes: Guy Ritchie returns to his roots with a Brit Gangster movie. As is usual for his films, the action is snappy. It wasn’t easy, but I’ve managed to find a few times when I could get a few scenes long enough to summarize!

There are extra scenes during, or after, the end credits of The Gentlemen. (What we mean by Anything Extra.)