There are extras during the end credits of Eternals.

There are two extra scenes. The first extra scene comes about 2 1/2 minutes into the credits and is about 2 minutes long.

The second extra scene comes at the end of the credits and lasts about 1 1/2 minutes.

The credits run for approximately 12 minutes. 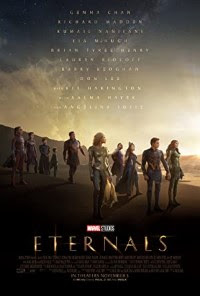 About The Peetimes
We have tickets to see the opening show at 6:00 PM Eastern on Thursday. This is a long movie, so Peetimes won’t be posted until around 10:30 PM later that night.

There is a very small chance that we’ll be able to get some “temporary” early Peetimes. I’ll do what I can.

Following the events of Avengers: Endgame (2019), an unexpected tragedy forces the Eternals, ancient aliens who have been living on Earth in secret for thousands of years, out of the shadows to reunite against mankind’s most ancient enemy, the Deviants.