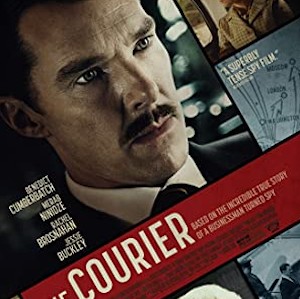 Whenever I do Peetimes my husband requests I call and let him know I’ve made it home safely. (He’s a truck driver out on the road.) I started my call with, “You better thank Oleg Penkovsky for even being alive.”

He didn’t know what I was talking about. Of course neither did I, two hours previously. The Courier was based on the Cuban Missile Crisis, which was way before my time. Being honest, I had heard of it but didn’t know the details. Now I do, and I’m really thankful that Oleg Penkovsky (Merab Ninidze) had the courage to do what he did. His actions, along with Greville Wynne (Benedict Cumberbatch), saved the world.


This was a very well acted movie, packed full of talent. Recently I’ve been seeing Cumberbatch pop up in a lot of new releases. I like him; that guy can act. He’s very versatile and simply likable.

This wasn’t really a movie I wanted to see but I’m very happy I did. Now don’t get me wrong, I didn’t enjoy it for entertainment purposes, but more so I was enlightened by it. I had to take my eight year old granddaughter and her comment when it was over was, “The USSR leader guy is really rude.” I chuckled and thought that was an understatement.

About The Peetimes: Both Peetimes will work well. They give you plenty of time and you won’t miss any of the critical scenes. Heads up: When the movie starts, you are given written notes on what is taking place. There are a lot of them and they move fast, so try not to be late for this one.

There are no extra scenes during, or after, the end credits of The Courier. (What we mean by Anything Extra.)

chevron_left 5 Novel Based Movies Nominated For Oscars
Is there anything extra during the end credits of The Courier? chevron_right