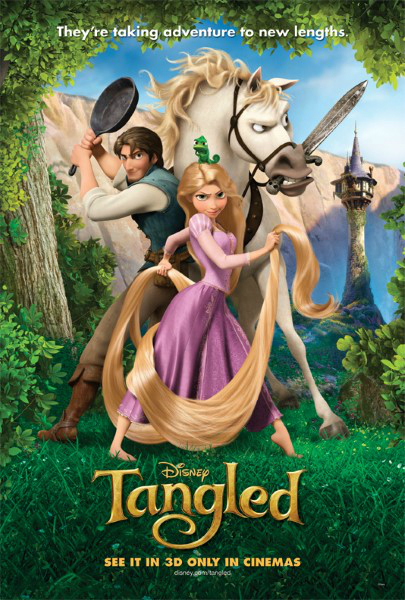 I’m only 3/4 of the way through my first viewing of Tangled (yes, my 1st time) and I love it already so much I’m willing to give it an A+. Of course, they could screw it up during the climax and I’ll have to change my review, but so far I’m completely delighted.

Tangled: beautifully animated, very funny, and packs in a lot of adventure. I’m stingy with my A grades, and give almost nothing an A+, so this is a good endorsement from us at RunPee.

There’s a handsome Han Solo type of rogue. Which…yay! And of course there are amusing animal sidekicks. What’s cool is that both the horse and chameleon have a ton of attitude, which Disney doesn’t usually do. Actually, their “men” aren’t usually ‘jerks with a heart of gold’, except for Flynn here, and  Naveen in The Princess and the Frog. So this is kind of a treat. Ahem.

I smiled a lot, especially with the Snuggly Duck ruffians singing about their dreams. Really. What could be more cute than that scene?

This movie made me happy.

Then there’s Gothel, the ‘wicked’ adoptive mother. She’s an awesome villain. Her songs are totally fun, and she’s actually nice to Rapunzel. She really is. She’s affectionate, goes out of her way to get Rapunzel a birthday gift, and gives the girl a decent life (albeit as a complete prisoner) with games, books, paints, a great kitchen, craft supplies, a lot of leeway for doodling all over the walls…pretty much anything one can do inside a nicely appointed tower.

Gothel’s not evil so much as selfish…but not completely unrelatable. She’s not about riches or power. She just wants to stay young and live. Ursula from The Little Mermaid is still my favorite Disney villain, but Gothel is surprisingly interesting. I liked her better than Scar from The Lion King, and he was previously my second favorite Disney villain. Good job, Tangled!

And a Disney Easter Egg or Two

I find one in the movie Tangled: a stylized depiction of Snow White’s Poisoned Apple painting on a stairway balustrade in Rapunzel’s Tower. Easy to miss, but it’s there.

Also, Rapunzel and Flynn show up at the Coronation scene in Frozen, which is pretty cool. Her hair is still short and brown. Disney doesn’t want to be a shared universe, but now that Pixar/Marvel have been absorbed by the Mouse, things are changing.

I’ll be watching the last part of this movie tomorrow (I have to see Ad Astra tonight to get Peetimes) and really hope Tangled’s climax doesn’t let me down. I’ll be back soon to let you know if this is truly an A+ film.

UPDATE After Finishing Tangled: I’ll keep the A+. It met up with my expectations, even though I thought they could have wrapped up Mother Gothel’s story a little less gruesomely.  Put her in prison or something, like the Stabbington brothers, who were, you know, actually evil. I did love the return of the ‘dreamer’ ruffians, though. See? Some people are redeemable. (I really would like Disney to stop with the bad parent theme, like they did with Brave.)

About The Peetimes: This Disney classic was re-released in theaters this Friday. When I do Peetimes for Disney Princess films, I do my best to avoid any songs, which is what most fans want to see. Some exposition or mild plot scenes are chosen instead, but are well-summarized in the synopses. Tangled has 3 good Peetimes, so you won’t be lost when you get back from the toilet. Pick any.

There are no extra scenes during, or after, the end credits of Tangled. (What we mean by Anything Extra.)