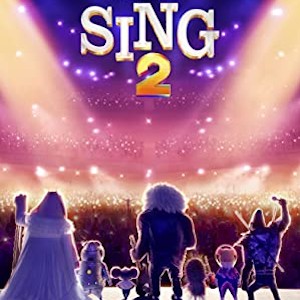 Sing 2 is an ADORABLE movie with spectacular song and dance numbers, great animation, and a lot of heart and humor. The story is a fine follow-up to the lives of the animals well-loved from the original, with some cameos of minor roles in the first few minutes…so try not to be late.

Where Sing 2 falls down a bit is in the character arcs.

Sing 2 is mostly plot-driven, unlike Sing 1. Rosita gets a small arc, and so does Meena, but it’s spare change in the bigger story. Taron Edgerton (Johnny) is mostly wasted, which is a shame. Johnny’s big dance fight featured a sweet Black Panther sequence — you’ll know it right away when you hear it — but Edgerton’s voice isn’t really on display. Actually, I would have liked more individual singing overall. That was mostly set aside to make big stage production numbers (instead of the character showcases from the original).

You also may or may not be amused by the Trump stand-in, but I think most people will find it spot-on, regardless of politics.

There were a lot of homages throughout — my favorite was Rosita landing in the classic Black Widow pose, especially as Scarlett Johansson (as Ash) was actually in the movie. 🙂 And I’m not entirely certain that the space opera wasn’t a fun nod to Guardians of the Galaxy. Someone on staff likes the MCU!

Try to see the original first

I highly recommend watching Sing 1 before catching Sing 2, if you haven’t by now. The sequel wastes no time catching up the viewer. At all. You’re expected to know who everyone is and why they’re here.

BTW, Mike the Mouse is nowhere to be found. They got everyone else back, so I wonder why Seth McFarlane wasn’t onboard. He usually loves stuff like this, and the man can croon. I miss Mike’s velvety voice and bad attitude.

These are all minor quibbles. Sing 2 is a sweet little bon-bon to take you out of global troubles and entice you to relax for an hour and a half. Plus, Bono! Seriously. The U2 songs made me tear up and smile all at once. Ahh, nostalgia.

PS: I love the bushbabies, and so will you. They are the squid of the sequel. Cheers!

About The Peetimes: Here are 3 good Peetimes — I do recommend the 1st. If you’re a Sing fan, you won’t want to miss the song & dance numbers, or the best humor — stick to the Peetimes and you’ll be fine.

There are extra scenes during, or after, the end credits of Sing 2. (What we mean by Anything Extra.)

Plot
Buster Moon and his friends must persuade reclusive rock star Clay Calloway to join them for the opening of a new show.