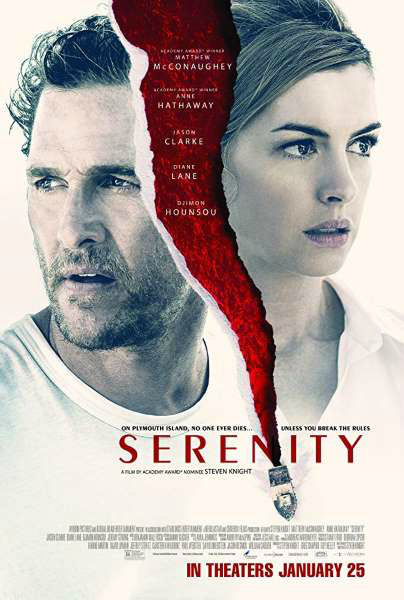 Serenity is one of those movies that you’ll either love, or really hate, or maybe a little bit of both.

Not everyone will get this movie, so I’ll follow that statement up with this: you need to pay attention to the screen. There are visual clues and verbal clues, but they all have a purpose for the plot.


What was the plot of this movie? A drunken fishing boat captain has his life turned upside down by a visit from his ex-wife, while, what he really wants to be doing is going all Moby Dick on a giant tuna.

I did like Serenity very much. Didn’t love it, but definitely didn’t hate it either. Since this was an almost a one-man show – I think McConaughey was in almost every scene — I’ll talk about his role in the movie. In a nutshell, he was awesome! Maybe because he was channeling his inner person — a beach bum.

Some critics have put Serenity in the ‘film noir’ category, and I agree that it had all the earmarks of said category: pessimism, fatalism, and menace. With that said, I’m not sure how to assess Anne Hathaway’s role. She ‘tried’ to come off as a sultry, sensuous femme fatale, but all she did was a parody of Kim Basinger in L.A. Confidential. Was this what Steven Knight was shooting for?

The pacing was well done, and I can find no fault in the directing although — if I had not known who directed this movie — I would have guessed M. Knight Shyamalan, because the flick bore some resemblance to The Sixth Sense. (The don’t believe everything you see or hear kind of resemblance.)

So basically, if you enjoyed The Sixth Sense and didn’t feel totally stupid when you found out the big reveal, I think you might enjoy Serenity.

About The Peetimes: This isn’t a particularly fast paced movie, leaving me with several good opportunities for Peetimes.

There are no extra scenes during, or after, the end credits of Serenity. (What we mean by Anything Extra.)