Happy Death Day – All the Clues to the Killer (SPOILERS) 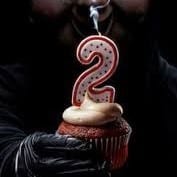 On first viewing, the twist in Happy Death Day seems to come from nowhere.  But the filmmakers have played fair all along.  If you watch it a second time, all the clues are there for an observant audience member to piece together what’s happening.

(I’ve said it in the the title and this should be clear by now, but be aware this article contains spoilers for Happy Death Day 1.)

1.  The Killer:  There are two big moments in the movie that hint at who the killer is.

On day 4, Carter tries to help Tree narrow down the list of suspects.  He asks her who knows it’s her birthday.  Thinking of the surprise party later that night, she says the whole campus.  But the only person who’s made a big deal about her birthday is Lori.

Later, the killer uses a candle (or is it the whole cupcake?) to light the fire that blows up the cop car Tree is trapped in.  The only person we’ve seen in the entire movie with a birthday candle is Lori. There wasn’t even cake at Tree’s party.

Lori tries to warn Tree away from Gregory when she visits him the first time.  She tells Tree her affair with the married doctor is bound to have “some pretty serious consequences.”

Later, when Tree apologizes to Lori for being a bad roommate, she says she wants to hear about Lori’s mystery guy.

Lori’s affair with Gregory is all but spelled out.  The filmmakers make sure to bring up the “mystery guy” the second time because it’s close to the end.  That way we’ll make the connection when Gregory’s named is dropped at the climax.

So it was Lori in the dorm room with the cupcake all along!  (And my money was on Colonel Mustard in the study with the lead pipe.  Drats!)

Tree throws the cupcake away on day 1, sets it aside on day 2 without even blowing the candle out, and unwraps it on day 3 but sets it down to look for the remote.  (In a deleted scene, she drops it when she gets startled during the blackout before she has a chance to eat it.)  It’s only on Tree’s next-to-last day in that Sixteen Candles tribute scene that she finally eats the poisoned cupcake.  Who doesn’t eat a cupcake the moment it’s presented to them? A careful observer would catch on that something suspect is going on with the cupcake.

Happy Death Day is one of my favorite recent horror films and I love analyzing it and seeing how they put it together with a horror spin on the Groundhogs Day theme.  Stay tuned to this blog for a review of Happy Death Day 2 U, coming out on Valentine’s Day this year.  Remember to get the Peetimes for it from the RunPee app!