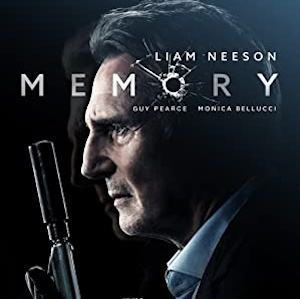 The easiest way to explain Memory is it’s a memory of all of Liam Neeson past movies.

It’s Liam doing his thing like always. He still impressed me with his ability to crush the bad guys at 69 years old.


That’s where the great stuff ends. I felt like the supporting cast fell flat. The acting wasn’t that great and the plot got muddled. I found it tedious keeping up with where they were and who they were talking about.

Overall, it was a little less than okay. I’d wait for it to stream, it wasn’t worth the ticket price.

About The Peetimes: There are 3 Peetimes for you to choose from. I feel that they are all spaced out nicely to give you a break when you need one.

There are no extra scenes during, or after, the end credits of Memory.

Plot
Alex Lewis (Liam Neeson) is an expert assassin with a reputation for discreet precision. Caught in a moral quagmire, Alex refuses to complete a job that violates his code and must quickly hunt down and kill the people who hired him before they and FBI agent Vincent Serra (Guy Pearce) find him first. Alex is built for revenge but, with a memory that is beginning to falter, he is forced to question his every action, blurring the line between right and wrong.

chevron_left A Long Time Ago, In A Blog Far, Far Away…
Is there anything extra during the end credits of Memory? chevron_right