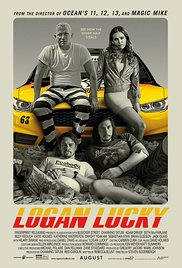 If I was forced to describe this movie in one word, I’d choose deceiving. We walked into the theater expecting a slap-stick goofy comedy where everything that can go wrong does. Well, let me tell you, we were wrong.

It is very funny, but not in a slap-stick kind of way — it was a mellow funny, if that makes sense. I would go so far as to say the actors didn’t even have to speak to be funny. It was the way they all flowed together. Cohesive Chemistry! I just made that up and I think it describes it perfectly.

My hats, and well — lets face it, my pants — off to Channing Tatum. That guy is hot! I’m used to seeing him in dance movies like Magic Mike. His sex appeal isn’t really in the spotlight in Logan Lucky, but he still works it, just like a stripper pole. He gave an A-1 performance.


The supporting cast was perfectly selected; again, they all worked magically together. Daniel Craig was hilarious; quite the different role for him, and it left me wanting more. Hilary Swank and Katie Holmes added just the right touch of female humor to balance this movie out. Perfect date night movie!