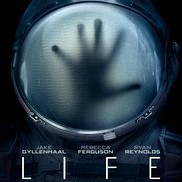 I don’t even know how to rate this one. For the record, I absolutely hated it. I’m even the target audience, according to the trailers, as I LOVE science fiction and space movies. However, you should all know this is a straight body horror film, with gristly, gruesome, and horrific scenes occurring frequently once the 27 minute mark takes place. There is even a ghastly animal death to start the body count. If you like seeing bodies turn inside out, this movie is for you.

Life has stylish filmation, and a great cast. The story takes some risks. I guess those are things to applaud. If I enjoyed horror, I might appreciate this. I really don’t know. I was expecting a rousing space action film with bits of horror, like a modern telling of Aliens. That was my impression from the trailers. So, for now, we can give this a high C. I would prefer to give it an F.

Know this, going in – the film is dark, horrific, depressing, and unspeakably disgusting. I had to go home and shower it off. And don’t bother attending if you are a Ryan Reynolds fan – he’s barely in the film. There wasn’t any humor worth remembering, and I never even got to learn the names of the characters. Not that any of them matter. Only the alien, Calvin, gets any attention from the script.


I spent fully half the film turning away from the screen to avoid the lovingly depicted grotesquerie on display. Not a classic like The Thing, not inspiring like Arrival; not much of anything at all. Do not pass Go, do not collect $200, and don’t even bother with the DVD. I’m really pissed that the trailers didn’t warn me what I was about to be subjected to. I’d love to hear from horror fans what they thought of Life. Was this good? What the hell did I just watch?

About The Peetimes: Just so you know, all of these Peetimes suck. The action and grisly activity starts at 27 minutes into the movie, and does not relent until the end. This may be the single hardest film I’ve had to find Peetimes for. So…people die during these Peetimes. But someone is dying in this movie every few minutes, so that is inescapable.

There are no extra scenes during, or after, the end credits of Life. (What we mean by Anything Extra.)