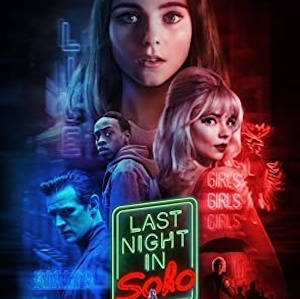 Last Night in Soho blew me away. From the very first scene, I was captivated by Thomasin McKenzie. I first saw her in Jojo Rabbit — she was great in that – but she was stupendous in Soho. I’d label my reaction to her as mesmerized throughout the entire film. I want to see a lot more of her.

In acclaimed director Edgar Wright’s psychological thriller, Eloise, an aspiring fashion designer, is mysteriously able to enter the 1960s where she encounters a dazzling wannabe singer, Sandie. But the glamour is not all it appears to be and the dreams of the past start to crack and splinter into something far darker.

Moving on to the movie itself, again I was completely awed. The cinematography, the acting, the sets, and the soundtrack were perfect. The storyline was done in such an interesting way; it was something new that I haven’t seen done before. That’s another big part of my love for the movie. It was fresh. This is a shout-out to the entire cast, crew, and production for giving us something new.

I honestly can’t think of one thing I could complain about. For me, that is very rare. This movie is going to get an A+ from me. I’d recommend this movie to anyone above 17; there are a few scenes that little eyes shouldn’t see.

If you go, I’d love to hear your feedback. Enjoy yourself, sit back, and experience the magic of the movie.

About The Peetimes: There are 2 great times to choose from. After watching this though — even if my eyeballs were starting to float — I’d still hold it.

There are extra scenes during, or after, the end credits of Last Night in Soho. (What we mean by Anything Extra.)

What does the ending of JoJo Rabbit mean? (Spoilers)

chevron_left 3 Beloved Shows That Could Produce Strong Films
Is there anything extra during the end credits of Last Night in Soho? chevron_right