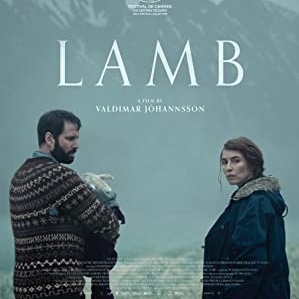 I battled with myself all night long on what I would and wouldn’t say about Lamb. It’s no secret that I have had issues with every single movie that A24 has done. If you are fans of A24 I will apologize ahead of time. The deciding factor as to which route I would take came from something that a big group of people in my theater yelled out as the credits rolled. The three words that came out of their mouths summed it up perfectly. They yelled, “WTF?” We all know what that stands for.

Plot (Spoilers)
A childless couple, María and Ingvar discover a mysterious newborn on their farm in Iceland. The unexpected prospect of family life brings them much joy, before ultimately destroying them.

Here’s one of my biggest gripes: lack of backstory. Come on A24, when are you going to start giving us some? We had to wait thirty-five minutes into the movie to get our first answer, which was only a glimpse of something. I hate that. Here’s another one: character development. That is ridiculously important in forming a good story.


Who are these people we’re watching? Am I supposed to like them, hate them or feel sorry for them? I don’t know, hell I don’t think A24 knows. But wait, there’s more, they throw in these scenes that you’re wondering WTF is this all about. I’m sitting there thinking, “Did they accidentally edit another film’s scene into Lamb?” The scene I’m speaking of was so totally random and it never got tied into the movie.

The story had the potential to be great. I feel if perhaps Blumhouse did it, it would have been phenomenal. I feel their vision would be 20/20 while A24 is sitting over there wearing bifocals so thick they can see into the future. Too bad they couldn’t see in the present and maybe produce a good movie for once.

About The Peetimes:
First, this movie is subtitled. Thankfully there wasn’t much talking but be prepared to read a lot.

Both Peetimes come right before big reveals, so be fast.

There are no extra scenes during, or after, the end credits of Lamb. (What we mean by Anything Extra.)

chevron_left RunPee Weekly Newsletter #82 (October 6th, 2021)
Is there anything extra during the end credits of Lamb? chevron_right