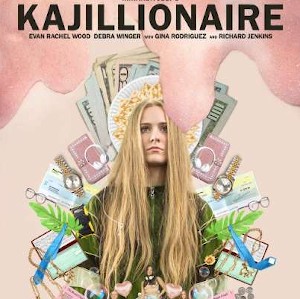 I have no idea where to even begin. I still don’t know if I like it, loved it or hated it. This will probably get me in trouble with the boss but I even contemplated leaving early. I thought to myself if I could just make it long enough to get a second Peetime, I was out of there. I already knew about the end credits so I’d be safe. Low and behold by the time I captured my second Peetime, I had to stay and see it through. They had captivated me by then.

This is a slooooooow paced, quirky movie, combined with sadness — or it could have been skewed happiness. I’m still not quite sure. Old Dolio, played by Evan Rachel Wood, is the main focus. You’re seeing the movie played out through her version of reality. She seems to take all of it in stride, but inside some other emotion starts to burn through her tough façade. She has it in check until Melanie — Gina Rodriguez — enters their lives.

I feel when Melanie stepped into the movie it got a lot brighter. She is a delight to watch on screen. I have to admit, it was her character that I was really drawn to and simply stayed to see how it played out for her.


Old Dolio’s parents, played by Debra Winger and Richard Jenkins, were just this side of crazy. The facial expressions that Winger pulled out numerous times were a riot. Her peculiar character traits were fun and refreshing to watch. I liked her a lot, even though I thought her character was a total failure at parenthood. Same goes for Jenkins; he was funny in a demented way that made me laugh, while at the same time feeling dirty inside.

I’m going to give this movie a solid B. I’ll warn you it is a slow mover, and you’re not going to get an epic finale, just a simple aaah-ha moment. Then it’s over. The End.

About The Peetimes: I found 2 Peetimes that were easy to sum up for you. They will give you the opportunity to sneak away and not lose the flow of the movie. My only warning is that the entire movie is character driven. There isn’t action so to speak — the whole movie falls into the category of “watch how this amazing cast does their magic.”

There are no extra scenes during, or after, the end credits of Kajillionaire. (What we mean by Anything Extra.)

chevron_left Is there anything extra during the end credits of Kajillionaire?
Top Tech Skills to Fight Unemployment during COVID-19 chevron_right